In one year’s time, French ESA astronaut Thomas Pesquet will take off for the International Space Station (ISS), on board which he will conduct scientific experiments prepared by researchers from Inserm. The scientific and technical programme for this ESA (European Space Agency) mission includes significant participation by France, managed by CNES (National Centre for Space Studies). Research projects from 3 Inserm laboratories will be conducted in orbit. Their purpose will be to study the effects of space on bone density, blood pressure and sleep. Data collected before, during and after the 6-month mission will be analysed by the researchers back on earth to obtain a better understanding of the related pathologies. 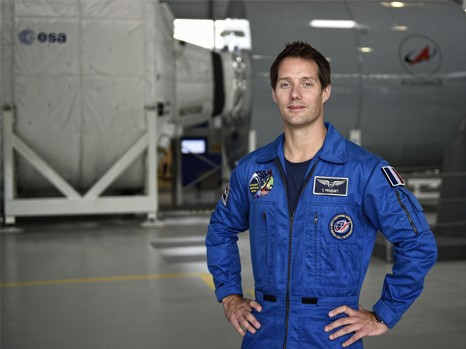 To find out more about the experiments to be conducted by Thomas Pesquet, read the complete file prepared by Inserm’s magazine:

Espace – L’Inserm en orbite (Space – Inserm in orbit) (Science&Santé No. 27, only in French)

Listen to the interview with Thomas Pesquet conducted on behalf of Inserm at the Paris Airshow (a coproduction of Inserm/CNES):

For your information, Inserm, a scientific partner of the flight operated by ESA, is holding a citizens’ conference, which will be attended by the researchers involved and Claudie Haigneré:

The research team will study space sickness and its relationship with travel sickness. Technologically, the laboratory is working with the Bodycap company on miniaturised actigraph and temperature sensors, and the corresponding analytical software. These sensors will be loaded into a smart vest which will be worn by Thomas Pesquet.

– This laboratory will study changes to bone due to space flight, and recovery on returning to earth.

– A second experiment, conducted in vitro, will be aimed at understanding why in space, bone marrow precursor cells differentiate into adipocytes at the expense of osteocytes, the main cause of reduced bone formation and hence of bone loss.

Space flights are good models for the study of accelerated ageing, in that some preliminary data indicate that arterial stiffness may increase by an equivalent of approximately 10 years during short space flights. Changes related to microgravity will be studied with the help of specially developed flexible sensors (in collaboration with ESIEE Paris and the ESYCOM laboratory