Although the acute stage of the Ebola epidemic in West Africa is behind us, the need for research to find preventative measures remains urgent. The global community shares the same goal: to prevent future epidemics as catastrophic as the one we have witnessed over the past two years.

To this end, Inserm is coordinating the Ebovac2 project, a collaborative effort, funded under a grant from the Innovative Medicines Initiative Ebola+ programme. The project was launched in response to the Ebola virus disease outbreak, to assess the safety and immunogenicity of a novel ‘prime-boost’ preventative vaccine regimen against Ebola Virus Disease (EVD). In France, clinical research centres specialised in vaccination are now recruiting approximately 300 healthy volunteers from 18 to 65 years old. The project is coordinated by Inserm under the scientific responsibility of Professor Rodolphe Thiébaut (Inserm Unit U897).

People interested in volunteering for the clinical trial can find out more information at www.recherche-vaccinebola.fr

The objectives of the Ebovac2 studies are to further determine the vaccine regimen’s safety profile and how well it stimulates the immune system to protect against Ebola infection.

Two vaccines[1] will be given a few weeks apart. The first dose is intended to stimulate, or ‘prime’, an initial immune response. The second dose then is designed to ‘boost’ the level of the body’s immune response further.

Researchers also want to work out the best timing for each of the vaccine doses. Volunteers will be put on different schedules, where the gap between ‘prime’ and ‘boost’ dose will be 28, 56 or 84 days. This strategy offers the advantage of potentially leading to improved and, especially, longer lasting immunity.

“The volunteers are divided into three groups. Participants in this trial cannot become infected with the Ebola virus. Only synthetic proteins or parts of proteins are used in the various vaccines being tested. They cannot in any way cause infection. This is based on the same principle as many existing vaccines for infectious diseases,” explains Professor Rodolphe Thiébaut, coordinator of the Ebovac2 Project.

How is the vaccine trial for the Ebovac2 project organized?

Commencement of the Ebovac2 Phase 2 trials has been subject to the preliminary results from several ongoing phase 1 trials being carried out in Africa, the United Kingdom, and the United States, which show that the vaccine regimen is well-tolerated.

Volunteers are expected to participate in the trial for 1 year. Each volunteer will be rigorously monitored, and will be personally followed up by a doctor involved in conducting the study. Volunteers will be visited between 9 and 15 times, and will receive either the vaccine or a placebo. They are entirely free to interrupt their participation at any time and will be reimbursed for their time.

The vaccine trial has received all necessary authorisations guaranteeing the safety of volunteers (approval from the Comité de Protection des Personnes de Ile de France III, an institutional review board, as well as approval from the Agence Nationale de Sécurité du Médicament et des Produits de Santé, or French Agency for the Safety of Health Products).

What criteria must volunteers meet?

Setting up a recruitment campaign

In order to optimise chances for success of this clinical trial and recruit the requisite number of volunteers, Inserm uses various communication methods to provide all the necessary information and answer the questions of volunteers.

A toll-free number – 0800 156 156 – is operational as of now, and until February 2016. Trained staff welcome volunteers, answer their questions, and orient them towards centres close to where they live. 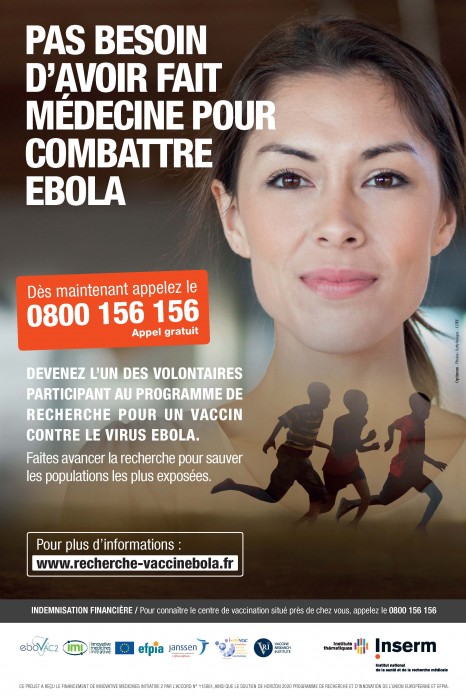 The organisers of the clinical trials

As coordinators of the project, Inserm works in conjunction with Crucell Holland, B.V., one of the Janssen Pharmaceutical Companies of Johnson & Johnson, the London School of Hygiene & Tropical Medicine (LSHTM), Oxford University, the Muraz Centre in Burkina Faso, and Inserm Transfert. In December 2014, the Ebovac2 project was funded under a grant from the Innovative Medicines Initiative’s Ebola+ programme which was launched in response to the Ebola virus disease outbreak.  This project has received funding from Innovative Medicines Initiative 2 by the Agreement No. 115861, as well as support from Horizon 2020 research and innovation program of the EU and the European Federation of Pharmaceutical Industries and Associations (EFPIA);

More information is available at www.ebovac2.com

“Inserm has been focusing on the Ebola virus ever since the alarm was raised by WHO in late 2013”, reaffirms Yves Lévy, Chairman and Chief Executive Officer of Inserm. “Since early 2014, researchers at Inserm (P4 Laboratory in Lyon) and the Institut Pasteur characterised the virus discovered in Guinea and its circulation area in the first months of the epidemic. Inserm has promoted JIKI, the only therapeutic trial evaluating the treatment of people infected with the Ebola virus in Guinea. This began in late 2014, and the results have been encouraging. Inserm is the co-promoter, with the U.S. National Institutes of Health, of this clinical trial (JIKIMAP), which began in Guinea in early July 2015.”

[1]Ad26.ZEBOV developed by Crucell Holland B.V., one of the Janssen Pharmaceutical Companies of Johnson & Johnson and MVA-BN® Filo developed by Bavarian Nordic.