Transposable elements, also known as “jumping genes” are DNA fragments that can move or copy themselves from one location to another on the chromosomes. They have invaded the genomes of most living organisms, from bacteria to humans, via the plants. When they jump, they bring about complex modifications in genes near which or in which they insert themselves, and can thereby alter or abolish their function. This phenomenon contributes to the evolution and adaptation of species.

However, in the shorter term, “jumping genes” can have harmful effects. In humans, the only currently active transposon family, the LINE-1 type retrotransposons, causes new cases of genetic diseases, such as haemophilia and muscular dystrophy. This is why their activity is normally under tight control. However, in nearly half of epithelial cancers, they manage to escape the many cellular defence mechanisms that protect our DNA, and jump actively, contributing to the emergence and progression of cancers. Moreover, in studies they are often used as tumour biomarkers for diagnostic or prognostic purposes. 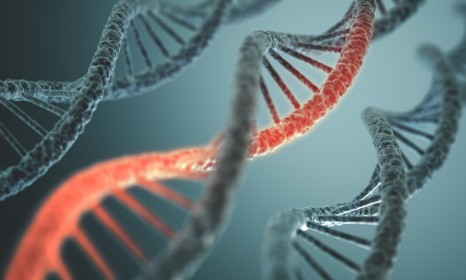 One of the main problems raised by the study of “jumping genes” is related to their extremely repetitive nature. Our DNA contains thousands of copies of them, almost identical to one another, and every individual contains hundreds of copies that are not listed in the reference map of the human genome. Furthermore, until now, it had been impossible to know whether activation of “jumping genes” results from a general disruption, leading to massive mobilisation of all copies, or whether, on the contrary, only a small number of them manage to escape the protective controls. Through a new approach, published in the journal eLife, involving high-throughput sequencing, genomics, epigenomics and bioinformatics, the team led by Gaël Cristofari, Inserm Research Fellow, and his collaborators at Unit 1081, “Institute for Research on Cancer and Aging, Nice (IRCAN),” has succeeded in measuring the activity of the “jumping genes” in normal and cancer cells with unprecedented resolution.

According to their results, only a small number of copies are really guilty: those located in permissive regions of our chromosomes. And these regions vary depending on the type of cell. Furthermore, all these active copies are not present in all individuals!

“The important concept here is that the small group of LINE-1 transposons that escapes control is different from one cell type to another: in certain cancers, one group is important, in another type of cancer, it will be another group of copies. This observation suggests that behind each LINE-1 group, there is a mechanism and signals specific for a particular type of organ or tissue,” explains Gaël Cristofari.

These results provide a better understanding of how new mutations may emerge, they suggest the existence of genetic factors behind this phenomenon, and they provide new data for the rational use of LINE-1 retrotransposons as biomarkers in oncology, by focusing on the active copies in a given type of cell.