The Bettencourt Schueller Foundation reveals the varied and far-reaching list of the winners of its scientific prizes.

The Bettencourt Schueller Foundation reveals the varied and far-reaching list of the winners of its scientific prizes, which, with a total value of €1.9 million, are awarded for high-level biomedical research.

The projects of the top prizewinners are characterised by original themes, enthusiasm, and risk-taking applied to human health and a wide variety of disciplines in biomedical research.

“In research, one needs passion, creativity, work, time… and a little luck,” says Professor Hugues de Thé, the new Chairman of the Foundation’s Scientific Board. As evidenced by the personalities and work of this year’s six top prizewinners, who are involved in the following disciplines:

The 20 prizewinners on this list were honoured at two separate ceremonies.

On 7 April 2015 at the Institut de France, Françoise Bettencourt Meyers, President of the Foundation, awarded the Coups d’Élan Prizes for French Research, in the presence of the Foundation’s two partners, namely Inserm (French National Institute of Health and Medical Research) and CNRS (French National Centre for Scientific Research), along with eminent representatives from the French scientific community. They were awarded to four prominent public research laboratories, and are aimed at optimising infrastructures and working conditions for researchers, i.e. remodelling, renovation, acquisition of equipment, etc. They also enable laboratories to acquire operational support. 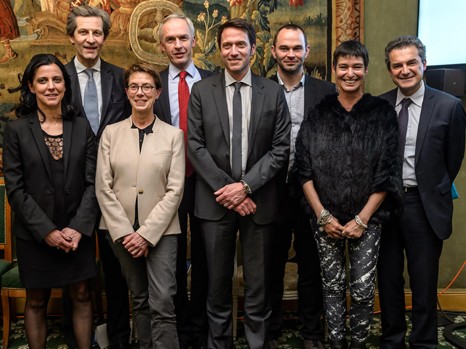 To date, 50 French laboratories and over 500 researchers have already been awarded the Coups d’Élan Prize for French Research, with an individual value of €250,000.

On 8 April 2015, the Foundation’s other prizes were awarded at a ceremony at the home of Liliane Bettencourt, Honorary President of the Foundation:

Scott Waddell, Professor of Neurobiology at the University of Oxford, received the Liliane Bettencourt Prize for Life Sciences. The ATIP-Avenir Programme grant was awarded to Leïla Perié (Physical Chemistry Curie Unit, CNRS / UPMC / Institut Curie) who, having returned to France, will establish her research team at Institut Curie, Paris. The Prizes for Young Researchers were awarded to 14 young researchers in science and/or medicine to enable them to carry out post-doctoral research in the best laboratories abroad.

The Bettencourt Schueller Foundation is fulfilling the mission it was given twenty-five years ago by its founders, André and Liliane Bettencourt and their daughter Françoise Bettencourt Meyers, to “give talent wings” to contribute to the success and influence of France.

This mission is expressed in three areas of involvement: life sciences, culture and solidarity. It is driven by the convictions that define a spirit and ways of working, for the greater good, without gain, and with a purpose of social responsibility.

In the last five years, the Foundation has distributed nearly €113 million, including €36 million in 2014. Since 1990, 332 scientific prizes have been awarded to over 5,000 researchers. In total, the Bettencourt Schueller Foundation has awarded, since 1990, a cumulative total of €257 million in donations to support the life sciences.

TO CITE THIS POST :
Press release – Inserm press room The Bettencourt Schueller Foundation reveals the varied and far-reaching list of the winners of its scientific prizes. Link : https://presse.inserm.fr/en/la-fondation-bettencourt-schueller-devoile-le-palmares-varie-et-audacieux-de-ses-prix-scientifiques-2015/18844/

2022 Inserm Prizes: Forming a Common Front for Our Health

This year, the Inserm Prizes are awarded to five individuals whose results and commitment to high-quality research demonstrate scientific excellence and the Institute's central place in society. The Inserm 2022 Grand Prize goes to Olivier Delattre, an oncopediatrician whose work has led ...