Lung cancer diagnosed before it is detected by imaging

A team of researchers from Inserm led by Paul Hofman (Inserm Unit 1081/University of Nice) has just made a significant advance in the area of early diagnosis of invasive cancers. In a study which has just been published in the journal Plos One, the team shows that it is possible to detect, in patients at risk of developing lung cancer, early signs, in the form of circulating cancer cells, several months, and in some cases several years, before the cancer becomes detectable by CT scanning. This warning could play a key role in early surgical intervention, thereby making it possible to attempt the early eradication of the primary cancer site. 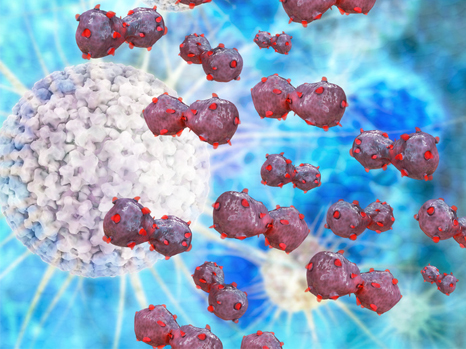 Studies carried out in animals have clearly shown that invasive tumours shed cancer cells into the bloodstream from the very earliest stages of their formation, even before the tumours are detectable by diagnostic imaging. The possibility of identifying these “sentinel” cells is considered a major asset in the race against time for the early detection, and hence treatment, of cancer. Circulating cancer cells are extremely rare in the bloodstream, are very heterogeneous and fragile, and are difficult to isolate without bias or loss.

The team of researchers led by Paul Hofman used a blood test developed during French research[1], which isolates all types of tumour cells from the bloodstream, without any loss, leaving them intact. The team studied a group of 245 people without cancer, including 168 patients at risk of later developing lung cancer because they had Chronic Obstructive Pulmonary Disease (COPD). Participants systematically underwent the blood test and standard diagnostic imaging tests. Using the blood test, circulating cancer cells were identified in 5 patients (3%), whereas imaging did not show any nodules in the lungs.

In these 5 patients, a nodule became detectable 1-4 years after detection of circulating cancer cells by the blood test. They immediately underwent surgery, and analysis of the nodule confirmed the diagnosis of lung cancer. Monitoring of the patients for a minimum of one year after surgery showed no sign of recurrence in the 5 patients, leading one to hope that the cancer had been eradicated. At the same time, no nodules were detected during monitoring of subjects who did not have circulating cancer cells, and no cancer cells were detected in the bloodstream of “control” subjects without COPD.

Detection of these circulating cells via this blood test could play a key role in early surgical intervention, thus making it possible to aim for early eradication of the primary cancer site.

Lung cancer is one of the most lethal cancers. According to the American Cancer Society (ACS), one-year survival among these patients is 44%, and 5-year survival only 16%. Only 15% of these cancers are presently diagnosed at a stage where the disease is localised. Early detection could both improve patient survival and help to improve health economics. COPD is the 3rd leading cause of deaths in the USA, and is mainly caused by smoking.

[1] known as ISET (Isolation by SizE of Tumour cells), and developed by Rarecells Diagnostics.

TO CITE THIS POST :
Press release – Inserm press room Lung cancer diagnosed before it is detected by imaging Link : https://presse.inserm.fr/en/lung-cancer-diagnosed-before-it-is-detected-by-imaging/16682/