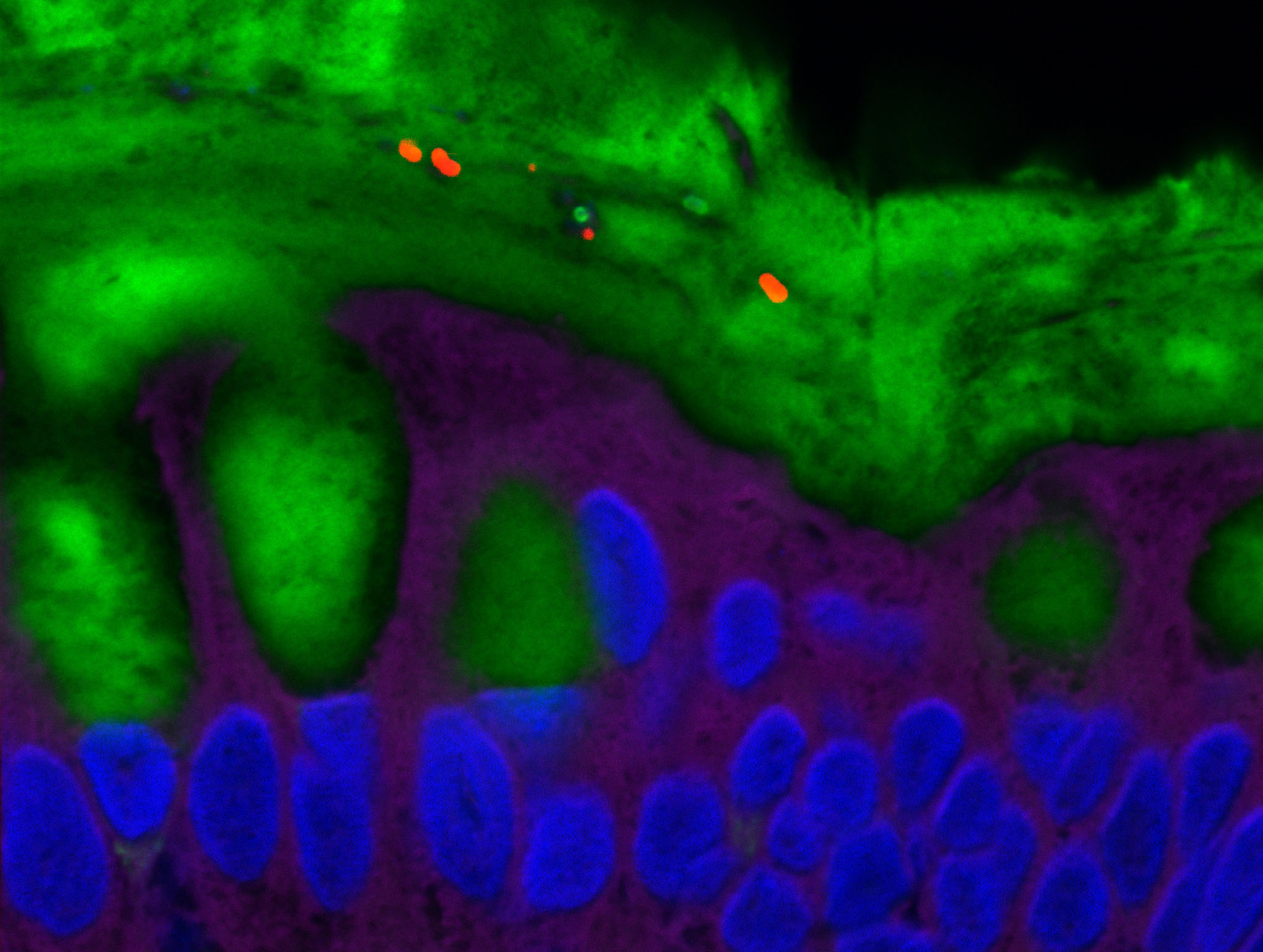 Certain bacteria of the intestinal microbiota (shown in red) are able to penetrate the normally sterile mucus layer (shown in green). © Benoit Chassaing

Diet is believed to play a role in triggering intestinal inflammation that can lead to the development of certain conditions, such as Crohn’s disease. Researchers from Inserm, CNRS and Université de Paris have shown that the emulsifiers present in many processed foods could have a harmful impact on specific bacteria in the gut microbiota, leading to chronic inflammation. Their findings have been published in Cell Reports.

The prevalence of chronic inflammatory bowel disease is increasing in all countries of the world and is thought to affect nearly 20 million people. Characterized by inflammation of the wall of part of the digestive tract, these conditions include Crohn’s disease and ulcerative colitis.

Several factors, both genetic and environmental, have been implicated in explaining the intestinal inflammation associated with these diseases. For several years, Inserm researcher Benoît Chassaing and his team at Institut Cochin (Inserm/CNRS/Université de Paris) have studied the role of diet, particularly the impact of certain additives such as emulsifiers.

Widely used by the food industry in many processed products, the purpose of emulsifiers[1] is to improve texture and extend shelf life. For example, lecithin and polysorbates ensure the smooth texture of mass-produced ice cream and prevent it from melting too quickly once served.

In previous studies based on animal models, the researchers had already shown that the consumption of dietary emulsifiers negatively alters the microbiota in such a way as to promote inflammation.

Moreover, in mouse models where the microbiota had been comprised of a low diversity of bacteria, they observed that the animals were protected against the negative effects of certain emulsifiers.

This led to their hypothesis that the emulsifiers would impact only specific bacteria, which are harmless under “normal” conditions but have the potential to cause disease. It is only in the presence of emulsifiers that these bacteria would be able to promote the development of chronic intestinal inflammation and its associated diseases.

E. coli as a model

As part of their study published in Cell Reports, the researchers used two mouse models: one without a microbiota and the other with a simple microbiota containing only eight species of bacteria. They colonized them with a strain of Escherichia coli (“AIEC bacteria”) associated with Crohn’s disease.

The researchers were interested in the effects of two emulsifiers administered following the colonization of the mice by the AIEC bacteria. Although the consumption of the emulsifiers had no harmful effects on the animals in the absence of these bacteria, they observed the development of chronic intestinal inflammation and metabolic deregulation when they were present. The presence of both the AIEC bacteria and the emulsifier was necessary and sufficient to induce chronic intestinal inflammation.

Further analysis revealed that when these bacteria were in contact with the emulsifiers, they over-expressed groups of genes that increased their virulence and propensity to induce inflammation. “We were able to identify a mechanism by which dietary emulsifiers can promote chronic intestinal inflammation in people who harbor certain bacteria, such as AIEC bacteria, in their digestive tract,” says Benoît Chassaing , who coordinated the study.

The next step is to list all the bacteria that have the same effects in contact with these food additives.

In the longer term, studies to identify and stratify patients according to the composition of their microbiota and risk of inflammation could be set up with the aims of taking a preventive approach and implementing personalized nutritional recommendations. People with specific microbiotas, sensitive to emulsifiers, could benefit from such recommendations.

“And while it is illusory to think that we can banish emulsifiers from our diet, the models and methodologies we have developed here will also allow us to test the action of several types of emulsifiers on the microbiota in order to identify those without harmful effects, and thus encourage their use,” concludes Chassaing.

[1] An emulsifier is a compound that has an affinity for both water and oil and allows the different phases of a compound to remain mixed together.

Both sickle cell disease and beta-thalassemia are genetic disorders that affect hemoglobin, and as such are categorized as beta-hemoglobinopathies. A team of scientists from Inserm, Université Paris Cité and the Paris Public Hospitals Group AP-HP at the Imagine Institute has shown the ...