In Paris, inhabitants of disadvantaged areas are more vulnerable to the effects of atmospheric pollution

In a new study published in the journal Plos One, researchers from Inserm have analysed the causes of 79,107 deaths of Paris inhabitants aged over 35 years between 2004 and 2009. Their objective was to explore whether or not a combination of neighbourhood characteristics (socioeconomic profile and daily exposure to pollution) modified the risk of mortality during episodes of pollution such as those experienced in France during the heatwave of early summer 2015.

The choice of Paris as a city was not a random one, since the French capital is characterised by average pollution concentrations that vary enormously depending on the area, and by a variety of districts that are home to populations with diverse socioeconomic profiles.

Two maps of the Paris districts were constructed. In the first, one can see the distribution of populations according to socioeconomic status of the residential districts (units known as IRIS). The second depicts the mean annual concentrations of nitrogen dioxide (NO2) over the study period. In Paris, NO2 in the outdoor air is mainly associated with heating buildings and car traffic. 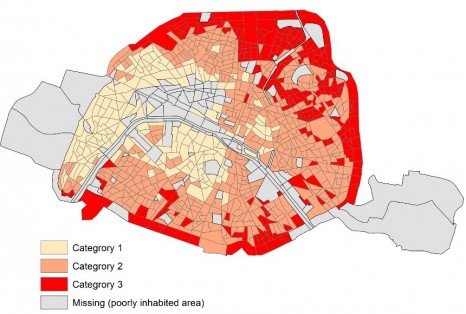 Dwellings housing the most disadvantaged people (category 3) are mainly located in the east and north of the city, whereas categories 1 and 2 are found in the centre and west part of Paris 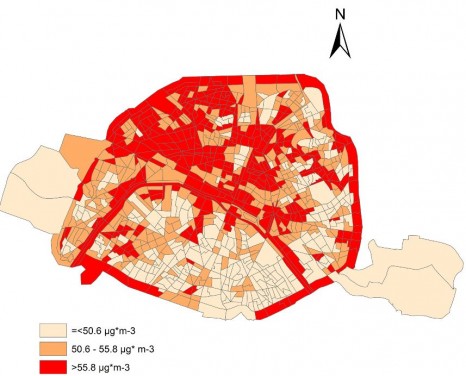 The most polluted regions are seen close to the main major traffic routes, along the Périphérique (ring road) and the Seine, and in northwest Paris.

The results of the study show that short-term variations in pollution and mortality are generally linked, and that there is a genuine risk of excess deaths during peaks of pollution.

TO CITE THIS POST :
Inserm press room In Paris, inhabitants of disadvantaged areas are more vulnerable to the effects of atmospheric pollution Link : https://presse.inserm.fr/en/in-paris-inhabitants-of-disadvantaged-areas-are-more-vulnerable-to-the-effects-of-atmospheric-pollution/20286/