Certain parts of DNA are highly mobile and their dynamic motion participates in controlling gene expression. The research team working under Maria‐Elena Torres‐Padilla, an Inserm research director at the Institute of Genetics and Molecular and Cellular Biology (Inserm/CNRS/University of Strasbourg), has just developed a method of observing the organisation and movements of the genome in time and space. The researchers succeeded in marking then monitoring parent genes during cell division. This new method will be a great step forwards to understanding the resulting processes that control gene regulation.

These results were published on October 6, 2013 on the website of the review Nature Structural & Molecular Biology.

In the cell nucleus, DNA is highly dynamic and changes its spatial configuration, in the same way as during the process of cell division. We already know that the spatial configuration of DNA determines whether the genes are active or inactive, in other words whether they are capable of expression. In this study, the researchers attempted to better understand the dynamics of the position of the genome in the nucleus in order to obtain a better overall understanding of the genome and the expression of its genes.

TALE proteins were first discovered in bacteria. They are proteins that bind with “artificial” DNA and are capable of targeting a specific DNA sequence in a cell. In use since 2009, this technology has up till now been used with nucleases, enzymes that are capable of accurately cutting targeted DNA. The work carried out by Maria-Elena Torres-Padilla’s team consisted in using TALE technology to mark a genome sequence and visualize its movement in vivo. The researchers succeeding in merging a green fluorescent protein (mClover) with a TALE protein, which allowed them to observe the localisation of specific DNA sequences inside the nucleus of living cells. This method, known as TGV (TALE-mediated Genome Visualization) gave the expected results and allowed the marked target DNA to be monitored in real-time. 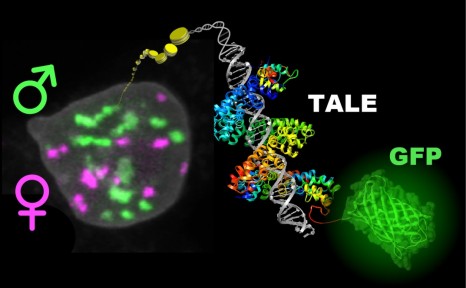 Observing what becomes of male and female genes after fertilization.

“We specifically marked chromosomes either from the father or the mother, then using TGV technology, we managed to monitor their location during the subsequent cell divisions,” explains Maria-Elena Torres-Padilla, research director at Inserm and principal author of the study.

“Our observations have opened up important new prospects of finding answers to questions in varied fields of research such as the cell cycle, DNA dynamics and in-depth study of the expression of parent genes, in particular do they behave and are they expressed in the same way,” concludes Maria-Elena Torres-Padilla.