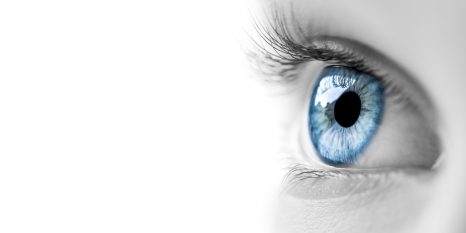 Restoring sight to patients with age-related macular degeneration (AMD) or retinitis pigmentosa has become an increasingly likely prospect over recent years, with many researchers working to develop an artificial retina. In a new study, a team from Institut de la Vision (Inserm-CNRS- Sorbonne Université) led by Inserm researcher Serge Picaud has used animal models to show that a device made by the firm Pixium Vision could induce high-resolution visual perception. Their findings, published in Nature Biomedical Engineering, have paved the way for clinical trials in humans.

Age-related macular degeneration (AMD) is characterized by deterioration of the retina that can lead to central vision loss. This highly incapacitating condition is thought to affect up to 30% of people over the age of 75. For years, several groups of researchers have been working on the development of an artificial retina that could restore eyesight – not just to these patients but also to those with retinitis pigmentosa.

The retina is made up of light-sensitive cells (photoreceptors) whose purpose is to transform the light signals received by the eye into electrical signals sent to the brain. It is these cells that are destroyed during the course of the aforementioned diseases, the outcome of which can be blindness. The principle of the artificial retina – which is implanted beneath the patient’s own retina – is simple: to act as a substitute for these photoreceptors. Its electrodes stimulate the retinal neurons to send messages to the brain.

Two devices of this type, Argus II (Second sight, USA) and Retina Implant (AG, Germany), are already in widespread use. “Nevertheless, these companies are gradually withdrawing from the market, particularly because the results seen in patients have been insufficient for targeting the device at those with AMD. The patients managed to see light signals but those able to distinguish letters were very much in the minority”, emphasizes Serge Picaud.

Reinventing the device to increase its performance: this is the aim of the Picaud and his colleagues. Supported by Pixium Vision, their artificial retina is wireless and less complex, unlike previous devices. In addition, this implant introduces a local return of the current, thereby enabling better resolution of the images perceived by the eye. Finally, the image is projected onto the implant by infrared stimulation that activates photodiodes connected to electrodes, enabling more direct stimulation of the retinal neurons. 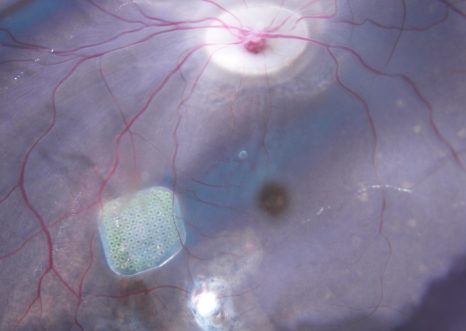 In a study published in Nature Biomedical Engineering, Picaud and his colleagues tested this device on non-human primates, demonstrating that it can restore significant visual acuity. In vitro tests showed first of all that each pixel activates different cells in the retina. This selectivity is expressed in the form of very high resolution, such that implanted animals can perceive the activation of just one of the implant’s pixels in a behavior test.

The high resolution of these implants led to the device being fitted in five French patients with AMD, for whom initial results show a gradual restoration of central vision. They are able to perceive light signals and some can even identify sequences of letters, with growing rapidity over time.

“The objective now is to conduct a Phase 3 trial in a larger group of patients with AMD. If the artificial retina works for them, there is no reason why it should not work in patients with retinitis pigmentosa – a disease also related to photoreceptor degeneration”, concludes Picaud.