Inserm is celebrating its 50th anniversary in 2014: first dates for your diary

The French national institute of health and medical research is celebrating its 50th anniversary in 2014. Below you will see a list of the first key events this year.

30: Publication of the book Au Cœur du Vivant (The Heart of the Living), published by Cherche-midi

10: First stage of the Science Tour (Vannes). A fleet of educational entertainment trucks will tour France to meet the public.

14: Press conference to launch the 50th anniversary of Inserm at the Futuroscope, Poitiers.

21: The first of 4 “Researchers welcoming patients” gatherings, on the theme of kidney diseases. 22 research teams in Strasbourg, Nantes, Toulouse, Marseille, Nice and Paris will open their laboratory doors to patient associations.

8–17 March: Famelab, regional selection stages. 3 minutes to use your powers of persuasion and become the new face of science. This competition for young researchers will be held in France for the first time, in partnership with Inserm.

3: Grand Colloquium to celebrate the 50th anniversary of Inserm at the Sorbonne, under the patronage of the President of France.

14: Inserm’s 50th anniversary is featured in the 2014 edition of Futurapolis, the forum for technological and scientific innovation in Toulouse.

16: Destination lab: 50 research laboratories will open their doors to the public all over France.

23: Second “Researchers welcoming patients” gathering, all over France, on the theme of rare diseases.

3: Launch of a stamp to commemorate the 50th anniversary of Inserm.

18: 50th anniversary of Inserm, created in 1964 by the amalgamation of the French Institute of Hygiene and the Claude Bernard Association. 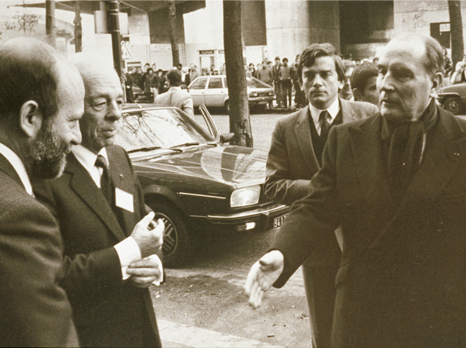 Welcome of the President François MITTERRAND by Philippe LAZAR, CEO of Inserm and Professor Jean BERNARD during the creation of the National Ethics Committee. ©M Depardieu/Inserm

TO CITE THIS POST :
Press release – Inserm press room Inserm is celebrating its 50th anniversary in 2014: first dates for your diary Link : https://presse.inserm.fr/en/inserm-is-celebrating-its-50th-anniversary-in-2014-first-dates-for-your-diary/10589/