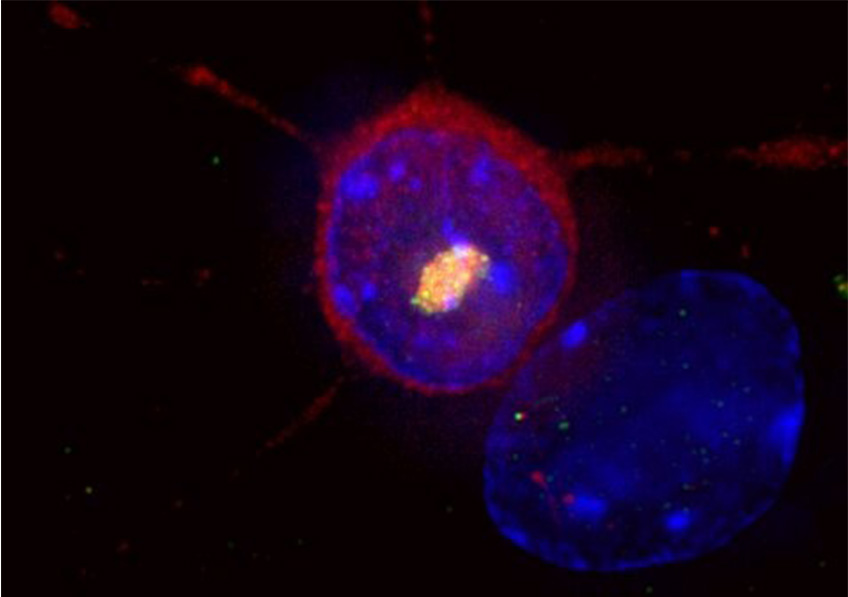 Huntington’s disease is a rare and hereditary neurodegenerative disorder. A striatal neuron expresses the causative mutant huntingtin protein (red), which accumulates in the nucleus (blue) to form an aggregate of huntingtin and other proteins, including ubiquitin (yellow). © Frédéric Saudou

Huntington’s disease is a hereditary disorder that causes degeneration of the neurons involved in cognitive, motor and psychiatric functions. While existing treatments address the symptoms and relieve certain aspects of the disease, they cannot alter its course. Researchers from Inserm, Université Grenoble Alpes and Grenoble Alpes University Hospital at the Grenoble Institute of Neuroscience are hoping to remedy this. They are studying a new therapeutic approach in the hope of offering patients the first neuroprotective treatment – one that protects neurons – in the years to come. The therapeutic molecule in question has shown promising results in mice and is currently undergoing preclinical evaluation. Their research has been published in Science Advances.

Huntington’s disease is a rare and hereditary neurodegenerative disorder. It usually begins between the ages of 30 and 50 and manifests with cognitive disorders, psychiatric disorders and uncontrolled movements that worsen over time until death some 20 years later. In France, this condition affects around 18,000 people: 6,000 already have symptoms, whereas around 12,000 carry the mutated gene and will develop symptoms later. The team of Frédéric Saudou, Director of the Grenoble Institute of Neuroscience (Inserm/Université Grenoble Alpes/Grenoble Alpes University Hospital), is working on a new therapeutic approach in an attempt to provide solutions for these patients.

The disease is caused by an abnormality on the gene coding for the protein huntingtin, which interacts with and regulates the activity of at least 400 other proteins involved in various cell functions, including the transport of molecules. This abnormality leads to a reduction in the transport of a key molecule, BDNF, in the brain between the cortex and the striatum. The role of this molecule is to promote the survival of neurons and ensure the connections between them. This reduced transport therefore causes the death of neurons in these brain regions.

“Long before symptoms develop, a reduction in BDNF transport is observed. This molecule is essential for the survival of neurons and for neural connections between the cortex and striatum – two regions involved, among other things, in mood and movement control,” explains Saudou, a professor at Université Grenoble Alpes and Grenoble Alpes University Hospital.

The researcher and his colleagues therefore thought that restoring its circulation would at least afford the brain partial protection from neuron death.

A molecule to restore BDNF transport

In collaboration with Inserm Research Director Sandrine Humbert, Saudou and his team had previously shown that BDNF is transported within vesicles made up of numerous proteins, including huntingtin. In this new study, the researchers identified an enzyme that regulates the transport of these BDNF vesicles by controlling a cell mechanism known as “palmitoylation.” By increasing palmitoylation with the help of a molecule called ML348, they were able to restore the transport of BDNF vesicles.

Several in vitro experiments on human neurons and in vivo experiments on mice have shown that ML384 crosses the blood-brain barrier and restores BDNF traffic from the cortex to the striatum. When administered in a mouse model of the disease, it reversed the symptoms.

“Injecting ML348 reduced the motor and psychiatric behavioral disorders, allowing the mice to regain activity close to that of their healthy counterparts,” explains Saudou. What is more, this molecule improves BDNF transport in human neurons derived from induced pluripotent stem cells (iPS cells) from Huntington’s patients, demonstrating that this molecule is potentially capable of having an effect in humans.

Following this proof of concept, the researcher and his team will move on to the preclinical testing phase to evaluate, using cell and animal models, the behavior of the molecule in the body, its safety, and identify effective doses. The ultimate goal is to develop a drug for patients. If these results are confirmed, this molecule could become the first “neuroprotective” treatment for Huntington’s disease, sparing certain neurons from degeneration and perhaps slowing its progression.