Mechanics and genetics: an indispensable cocktail for embryonic development

In the fruit fly Drosophila and zebrafish, mechanical strain may activate the genetic cascade that initiates the formation of the future organs during embryogenesis. A discovery made by Emmanuel Farge (Inserm Research Director at Institut Curie) and his staff might explain the emergence of the first complex organisms more than 570 million years ago.
The results of this work are published in the journal
Nature Communications. 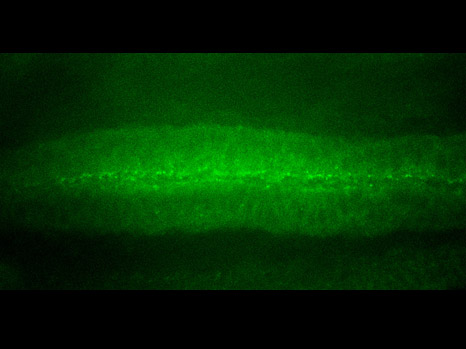 Living things exist in a multiplicity of forms. At the very beginning—whether they are early multicellular or embryonic forms of life—they are all nothing more than a mass of cells. A long series of morphological changes causes all existing life forms to develop from this one form.

The embryo adopts a particular form at each stage of its development. These successive deformations, which are genetically regulated, in turn create mechanical strain within the embryo. This strain also seems to influence or even regulate the expression of genes involved in development.

From Drosophila to zebrafish

“Whether in zebrafish or Drosophila, we have found that activation of the β-catenin protein at the beginning of embryonic development follows mechanical compression developed during the very first change in the form of the embryo,” explains the researcher.

At the very start of development, a morphological change—known as invagination in Drosophila and epiboly in the zebrafish—allows expression of the genes that specify the mesoderm1[1], in response to the mechanical activation of β-catenin in tissues that are particularly deformed by these movements. Complex organs such as the muscles, heart, or gonads are derived from the mesoderm.

In their publication in Nature Communications, Emmanuel Farge and his team show in detail that the mechanical strain occurring during this morphological transition induces a modification of β-catenin (phosphorylation), which induces its relocation from the surface of the cell to its centre.

This protein may take on several roles: on the cell surface, it is responsible for cell-cell adhesion and may thus undergo mechanical strain, become phosphorylated and then released into the cell; within the cell, it can activate certain genes and thus modify the fate of the cells. Thus mechanical compression can lead to the acquisition of an identity similar to that of mesodermal cells following relocation of β-catenin to the interior of the cell. “To reproduce the mechanical strain naturally undergone by the embryo, we introduced liposome-encapsulated magnetic nanoparticles into the embryo, which we then exposed to a micromagnet.

An answer to the origins of evolution into complex organisms?

“The main point is that the mechanosensitivity of gene expression has been conserved by Drosophila and zebrafish during evolution,” explains the researcher. “Its origin therefore goes back to the last common ancestor shared by the two species, i.e. over 570 million years.” Moreover, specialists in evolution associate this same period with a major transition in evolution: the emergence of the mesoderm in ancestral life forms, possibly related to the jellyfish, for example, which do not have a mesoderm. The origin of this transition, which led to the development of complex organisms, such as the vertebrates, has not been well understood until now. Researchers are therefore only now on-track to answer this long-standing question.

Going back still further in time, mechanosensitivity might have even contributed to the emergence of the very first organisms. And what if compression, triggered, for example, in a mass of cells because it was resting on the substratum, gave rise to local deformation of the cell mass and thus activated the first invagination of the very first primitive gastric organ, as suggested by the experiments previously done by the team?

Since the genes for embryonic development are implicated in the process of tumour progression, the mechanical induction of genes constitutes a new avenue for studying the development of cancers. The β-catenin protein is not unknown to cancer specialists. Thus during development of colon cancer, dysregulation of the β-catenin pathway is often described as one of the events correlated with loss of the APC gene. Furthermore, the development of cancer leads to the generation of physical strain affecting the neighbouring tissues.
It is a little as if the mechanism necessary for the development of the embryo were reawakened at the wrong moment. “Indeed”, underlines Emmanuel Farge, “when all is going well, APC protein degrades the β-catenin released into the cytoplasm by abnormal mechanical cues. When APC is mutated (which happens in 80% of colon cancers correlated with genome modifications), the β-catenin released into the cytoplasm is no longer degraded effectively, and is free to enter the nucleus and stimulate the expression of genes that promote tumour development.”

[1]  The mesoderm is one of the three embryonic germ layers, and is formed between the endoderm and ectoderm at the time of gastrulation. During development, it gives rise to most of the internal organs. Its existence is a feature of the most highly evolved organisms.