50% of fractures do not heal alone and require surgical bone grafting; this figure equates to around one million patients in Europe. The REBORNE project (Regenerating Bone Defects using New biomedical Engineering approaches), funded by the European Commission and coordinated by Inserm, has just received the green light from the French Medicinal Agency ANSM to begin orthopaedic surgery clinical trials. The clinical trials aim to repair bones using adult stem cells combined with biomaterials. It will be conducted in France in the Créteil University Hospital Centre and the Regional University Hospital Centre in Tours, in collaboration with the French Blood Establishment.

The REBORNE project began three years ago and its originality lies in using mesenchymal stem cells (MSC), found in bone marrow, to help heal fractures. Adult stem cells are amplified in culture, then are associated with biomaterial before being implanted on the fracture. Promising pre-clinical trials have now paved the way for the launch of these new clinical trials.

Following trauma (fall or road accident), there is a high incidence of delayed union or non-union in tibia, femur or humerus bones requiring a surgical apposition of an autologous bone graft (patient’s own bone). However, the bone graft available is limited and complications are often observed at the second surgical site. 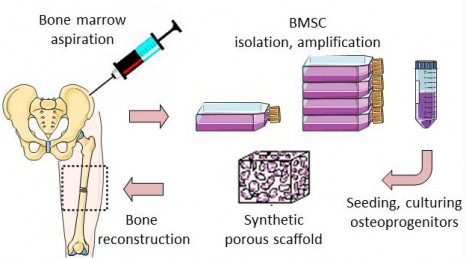 Thanks to a bone marrow aspiration under local anaesthesia, the mesenchymal stem cells are isolated and amplified in culture for 21 days. During the surgical intervention stem cells are associated with biphasic calcium phosphate ceramic granules and implanted at the site of the fracture. In this way, the biomaterial is used as “scaffolding” and encourages stem cell proliferation. The stem cells are then differentiated into bone cells and regenerate the bone tissue around the fracture.

Bone formation (in green) and bone barrow formation (in red) further to a mixture of human stem cells and biomaterial granules (grey/white) being implanted at a subcutaneous site in nude mice. This histological section shows osteoinduction by the cell/biomaterial mix with the formation of around 41% of bone tissue four weeks after implantation.

The French Medicinal Agency ANSM gave its green light on 3 January 2013 so that these Inserm-sponsored trials can now begin in France, with seven patients receiving treatment in the Créteil University Hospital Centre and the Regional University Hospital Centre in Tours. Ultimately, thirty patients will be included in France, Spain, Germany and Italy to be part of this multi-centre European study.

“The objective of this trial is to show that biomaterials and stem cells are safe and are at least equivalent to standard treatments, without their disadvantages. This surgery is less invasive and preserves the patients’ bone stock. For these reasons, it is preferable to bone grafts in terms of triggering bone healing”.

The objective of REBORNE is to develop new biomaterials that stimulate bone tissue formation with a view to correcting bone regeneration defects in orthopaedic and maxillofacial surgery. Biomaterials, combined with the use of stem cells, are interesting alternatives to biological grafts.

The REBORNE project kicked-off in January 2010 and will run for five years using an overall budget of roughly 12 million Euros provided by the European Union (PC7). The project involves 24 partners, based in eight European countries: http://www.reborne.org/presentation.html