To celebrate this occasion, a colloquium, “30 Ans Déjà” (30 Years Already) has been organised by Inserm and the publisher EDK/EDP/Sciences on the theme “How do we read, why do we write, how do we handle and how will we handle biomedical advances conceived in French in médecine/sciences?” 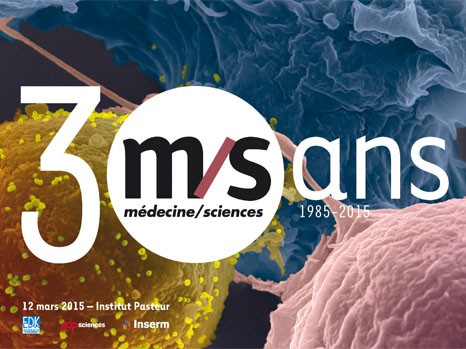 médecine/sciences (m/s) journal is the monthly French-language publication for excellence in biological, medical and health sciences research. As a journal that reviews and educates, it offers its readers a wide variety of writing on advances in national and international biological and medical research.

Inserm, which owns the title, is continuing the mission entrusted to médecine/sciences at its inception, and clearly summarised in its title: a continuous flow between “sciences” as knowledge production, and “medicine,” as a source of knowledge in itself; m/s is an academic journal for the communication of academic knowledge and learning, unlike any other and probably with no equivalent in Europe. In its political and international francophone dimension, it occupies a position at the heart of modern science and medicine, with an increasingly marked social awareness.

The journal, in hard copy and electronic versions, has always been produced in France.[1]médecine/sciences is open access 1 year after publication. For the first year of publication, access to articles is restricted to subscribers, mainly scientists via their research organisations (Inserm, CNRS [French National Centre for Scientific Research], EFS [French National Blood Service], etc.) or their universities (Laval, Sherbrooke, Liège, etc.).A database of the m/s archives, produced by Inserm on the iPubli website, offers open access to the journal’s archives, other than the current year, for which issues can be accessed on the publisher’s website.

Steady growth has been observed in the number of visits to the website and the number of article downloads during the last three years. In 2014, visits to the website were as follows: 11,700 unique users per month (45% of visits from France, followed by the United States and China); and 120,000 article downloads in PDF format per year. Analysis of connection sources suggests that half of visits are from France and half from the rest of the world.

A brief history of a resounding success

In the very early 1980s, programmes of action launched by the French and Quebec governments led to the creation of médecine/sciences (m/s), an international French-language journal reviewing biomedical research.Professor Jean Hamburger, a pioneer and dedicated supporter of the project, surrounded by a team of young researchers and clinician researchers (Xavier Bertagna, Laurent Degos, Serge Erlinger, Jean-Pierre Grünfeld, Axel Kahn, Claude Matuchansky), would specify its content.Four sections: an editorial, review articles making up the body of the journal, science news, and original research notes.Research and higher education institutions would also join the effort for the “Promotion of French, a language of science, and dissemination of scientific and technical culture,” one of the 7 motivational programmes of the Framework Act for Technological Research and Development in France.An international memorandum of understanding between the French and Quebec governments was signed in May 1984.In March 1985, m/s was launched in France by Hubert Curien, French Minister of Research and Technology, and in Quebec by Bernard Landry, Quebec Minister of International Relations.The memorandum would be regularly renewed until February 2006. At this time, the m/s title became the property of Inserm.

In addition, m/s publishes at least one Special Issue per year, and one or more Thematic Series consisting of articles spanning several issues, comprehensive states of the art, each covering a single rapidly expanding medical subject.

The French and Quebec founding members of médecine/sciences

[1] Under a public service delegation contract (DSP) between Inserm and a private publisher, successively Flammarion Médecine, John Libbey, Masson, EDK since 2002 and EDK/EDP Sciences since 2012.