Even at Low Doses, Exposure to the Endocrine Disruptor DEHP Impairs Tooth Development 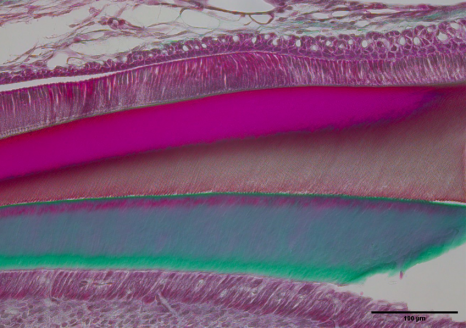 Sagittal section of the incisor of a mouse exposed to DEHP showing delayed mineralization of the developing enamel, the brown layer between the protein matrix (pink) and the dentin (green). © Sylvie Babajko/Inserm

Some endocrine disruptors have already been associated with an impaired quality of tooth enamel. After demonstrating the harmful effects of bisphenol A on tooth development, a team of researchers from Inserm, Université Paris Cité and Sorbonne Université, at the Cordeliers Research Center in Paris, in collaboration with CNRS[1] went on to look at the effects of DEHP, an endocrine disruptor in the phthalate family, on dental development. While the use of DEHP is highly regulated, it still continues to be found in food containers and certain medical devices such as neonatal intensive care equipment. The scientists have shown that the teeth of mice exposed daily to low doses of this substance present defects whose intensity and prevalence depend on the exposure dose and sex of the animal, with males being more likely than females to develop dental impairments. This discovery confirms the relevance of considering dental enamel defects as an early marker of exposure to environmental toxins. This study has been published in Environmental Health Perspectives.

The significant environmental changes of recent decades have impacted the health and well-being of human populations and all living organisms. Finding markers of exposure to the toxic substances present in the environment therefore represents a major challenge for research.

The scientific literature suggests that dental enamel could be one such marker.

Its analysis enables, for example, retrospective evaluation of the environmental conditions, either by identifying the presence of pollutants trapped in the mineral or by distinguishing enamel defects linked to alterations in cell activity occurring during its formation.

Exposure to endocrine disruptors such as bisphenol A has already been associated with one type of enamel defect, molar incisor hypomineralization (MIH), which is found in around 15% of children between 6 and 8 years of age. Other substances are being monitored, such as the endocrine disruptor DEHP which, despite regulations and bans, can still be present in many medical devices, including neonatal intensive care unit equipment[2].

On November 23, 2021[3], the European Commission published Regulation no. 2021/2045 amending Annex XIV by adding endocrine disrupting properties to DEHP, BBP, DBP and DIBP. As a result of these changes, certain previously exempt uses are now subject to authorization, including “medical devices and food contact materials that contain DEHP“.

Given the widespread presence of DEHP, its potential contamination of children (whose teeth are still forming), and previous data on the effects of certain endocrine disruptors on enamel, researchers from Inserm, Université Paris Cité and Sorbonne Université, at the Cordeliers Research Center, in collaboration with CNRS, wished to explore the potential effects of DEHP.

In this mouse study, the scientists observed the effects of daily exposure to DEHP, at both low and higher doses. These doses were equivalent to those that can be found in the context of environmental exposure:

After 12 weeks of exposure, defects were noted on the rodents’ incisors – teeth that have the particularity of continuous growth[4] and represent the ideal experimental model for studying developing dentition. Less mineralized and softer, the teeth of the exposed mice reflected impaired enamel quality, which worsened as the level of exposure to DEHP increased.

To supplement these data, the researchers then observed the effects of this exposure to DEHP at the cellular and molecular levels. They identified delayed enamel mineralization associated with altered expression of the key genes in enamel formation. Another particularity of the study was that the scientists compared the impact of exposure according to sex and observed greater susceptibility in males.

DEHP therefore disrupted the development of enamel in mice by acting directly on the dental cells, and with increased prevalence and severity in males.

Finally, the scientists point out that the effects observed on the growing teeth of rodents exposed to DEHP or bisphenol A are similar in terms of impaired enamel quality and greater susceptibility of males, and differ in terms of the cells targeted and the molecular mechanisms involved.

While these experimental data need to be consolidated, they do suggest that DEHP, like bisphenol A, could also contribute to enamel hypomineralization defects such as MIH.

“We know that the perinatal period and the first years of life are crucial to child development and health in adulthood. Dental enamel could be a very early reflection of the environmental conditions at this point in life,” explains Sylvie Babajko, Inserm Research Director and last author of the study.

For the research team, the next step is now to understand the effects of combinations of different classes of molecules – or “cocktail effects” – on dental health.

4 The teeth of these animals continue to grow throughout their lives, unlike human teeth.