Scientists at the Institut Pasteur and Inserm have identified the group of cells within the immune system that make immunotherapy treatment (therapeutic antibodies) effective. Immunotherapy is frequently used to treat breast cancer. In animal models they showed that neutrophils, the most common white blood cells in the body, are not only necessary but suffice on their own to eliminate tumor cells. The scientists produced these results using both skin and breast cancer models. If confirmed in humans, these discoveries should lead to the optimization of current treatments for several cancers. This work is being published online August 26, 2013 by the medical journal Blood.

With its millions of victims each year, cancer remains one of the leading causes of death worldwide. In women, breast cancer is the most common offender. Nearly one in nine women will develop breast cancer in their lifetime. In France alone, over 50,000 new cases are diagnosed each year.

Between 20 and 30% of breast cancer cases are deemed eligible for immunotherapy treatments which involve the injection of antibodies. Until now, the effectiveness of this type of treatment was attributed to various immune system components such as Natural Killer cells and macrophages. However, work by Pierre Bruhns, head of the Antibodies in Therapy and Pathology Laboratory (Institut Pasteur/Inserm Unit 760), and his team, in collaboration with Professor Clifford A. Lowell of the University of California Department of Laboratory Medicine and two other teams from the Institut Pasteur, has cast serious doubt on this theory. 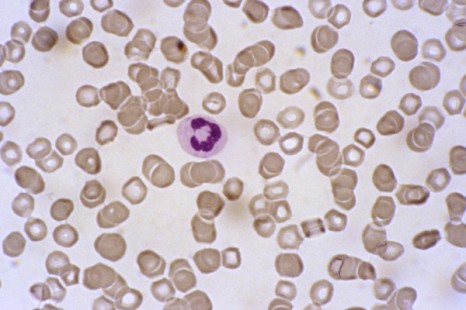 The scientists have shown in an animal model that neutrophils alone are effective enough to induce the therapeutic effect of immunotherapy treatments often used to treat breast cancer. Neutrophils are drawn to the tumor after the injection of therapeutic antibodies and are activated after coming into contact with these antibodies. Once activated the neutrophils are capable of destroying the tumor cells. This discovery represents an important step towards the optimization and development of immunotherapy treatments used to treat these cancers.

The scientists made the following observations: the tumor mass did not regress in mice that were neutropenic (having a significantly low level or total lack of neutrophils) or in mice with neutrophils that could no longer be activated through contact with therapeutic antibodies. Then, scientists showed that the anti-tumor effect achieved via immunotherapy could be reproduced in deficient mice by administering them with neutrophils taken from healthy mice. These observations were made using models for both skin and breast cancer leaving us to assume that neutrophils play an important role in immunotherapy treatments used to fight various other cancers.

In their conclusion, the scientists highlighted current immunotherapy treatments used to fight cancer. These treatments are often coupled with other treatments. Because of this, a good strategy might be to favor treatment pairings that increase neutrophil count and activity.