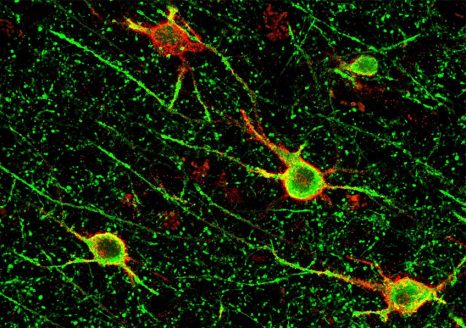 Immunolabeling of parvalbumin neurons (in green) surrounded by perineuronal nets (in red) in the human prefrontal cortex. © Arnaud Tanti/Inserm

In collaboration with a Canadian team, scientists from Inserm and Université de Tours, at Unit 1253 Imaging & Brain1, have shown in post-mortem brain samples that victims of child abuse present specific brain characteristics. The teams have revealed for the first time in humans an increase in the number and maturation of perineuronal nets, dense protein structures surrounding the neurons. In animals, this phenomenon regulates brain plasticity by inhibiting the remodeling of neural networks. This research suggests that abuse could cause lasting changes to the developmental trajectories of certain brain regions with potential effects on psychological health. The study has been published in Molecular Psychiatry.

Child abuse has effects on psychological development, including an increased risk of depression and suicide during the course of life. Sexual violence, physical violence or chronic neglect during childhood or adolescence are suspected to cause lasting structural and functional changes in the brain. It is during these periods that personality traits, attachment patterns, cognitive functions and emotional responses are shaped by our experiences, including traumatic ones.

Perineuronal nets emerge in early childhood and continue to develop until the end of adolescence, increasing in size and number. In animals, their development represents an important stage of brain maturation, with their emergence marking the closure of “critical periods” of plasticity during which the development of the neural circuitry can be easily modified by experiments.

The researchers estimate that these perineuronal nets could play a role in childhood trauma by immobilizing the neural networks associated with these memories, predisposing the individual to future depressive or behavioral disorders.

To study these structures, the researchers analyzed post-mortem brain sections from adults (from brain donations with informed consent from the next of kin) who had committed suicide an episode of major depression. Of the 28 subjects concerned, 12 had a marked history of child abuse. These sections were also compared with those of control subjects having died of natural causes and with no history of abuse or psychiatric illness. The different types of analyses performed by the researchers led them to make several observations.

Firstly, in the subjects who were abused during childhood, the perineuronal nets were denser and more numerous than those of the other individuals. They also presented more marked maturation characteristics, including increased structural development around the parvalbumin neurons. Finally, the researchers showed that the cells producing the main proteins that make up the perineuronal nets are oligodendrocyte progenitors, cells which are found throughout the brain.

The researchers will now use mice to explore the consequences of these observations in more detail, particularly on the persistence of traumatic memories linked to early adversity.

“These observations reinforce the hypothesis of a correlation between early stress and increased perineuronal net development. It remains to be discovered whether there is a causal link, that is to say whether these changes contribute to the development of behaviors associated with abuse, and how. Perhaps in the longer term we could consider a procedure targeting the perineuronal nets to help restore some plasticity and reduce the impact of trauma and the subsequent psychiatric risk,” explains Arnaud Tanti, Inserm researcher and first author of this study.