Most existing treatments for pathological bone loss inhibit osteoclasts (bone-destroying cells) to limit bone degradation. However, by doing this, they also prevent bone formation since it is stimulated by the presence of these very same osteoclast cells. Researchers from the CNRS, Inserm and the Université de Montpellier and Université Jean Monnet – Saint-Étienne[1] have developed a new approach for preventing the destructive activity of osteoclasts without affecting their viability. This involves disrupting their anchorage to the bone, which has been found to be possible using a small chemical compound called C21. This innovative treatment can protect mice from bone loss associated with osteolytic diseases[2] such as post-menopausal osteoporosis, rheumatoid arthritis and bone metastasis, without affecting bone formation. This research was published on 3 February 2015 in the journal Nature Communications. 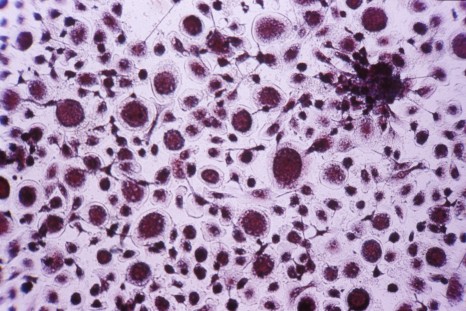 Bone is a highly dynamic tissue that is constantly in the process of being simultaneously destroyed and reconstructed. This dynamism is ensured by good coordination between the cells that destroy the “old” bone (osteoclasts) and those that reconstruct it (osteoblasts). In some diseases, bone degradation by osteoclasts exceeds bone formation by osteoblasts. As such, the challenge faced by researchers is to control osteoclast activity to avoid too high a rate of bone degradation leading to osteoporosis. However, osteoblast activity is stimulated by the presence of osteoclasts and, therefore, it is essential to find treatments for osteoporosis that reduce the activity of osteoclasts without affecting their viability. To destroy bone, osteoclasts use specific cell structures called podosomes, which are organized into rings by the actin cytoskeleton. Podosomes act like “snap fasteners” between the bone and the osteoclast by forming a kind of “suction cup” in which the bone is degraded. The researchers have shown that the exchange factor3 Dock5 activates a small enzyme called GTPase Rac, to organize the actin cytoskeleton and allow the formation of the ring of podosomes. Using different mouse models of pathological bone loss (post-menopause osteoporosis, rheumatoid arthritis and bone metastases), the scientists have discovered that administering a synthetic compound called C21, which inhibits Dock5, prevents osteoclast activity by blocking the “suction cup” effect that otherwise enables them to destroy the bone. Because the osteoclasts are still present, bone formation can still take place during treatment. In mice, these results validate the pharmacological inhibition of Dock5 as a new therapeutic pathway. The researchers are now seeking to develop more compounds that inhibit Dock5, other than C21, in order to continue fighting osteolytic diseases while preserving bone formation.
[1] From the Centre de recherche de biochimie macromoléculaire (CRBM) [Centre for Biochemical and Macromolecular Research] (CNRS/Université de Montpellier), Laboratoire d’enzymologie et biochimie structurale (LEBS) [Laboratory of Enzymology and Structural Biochemistry] (CNRS), Institut de recherche en cancérologie de Montpellier (IRCM) [Montpellier Cancer Research Institute] (Inserm/ Université de Montpellier) and Laboratoire de biologie intégrative du tissu osseux [Laboratory of integrative biology of bone tissue] (Inserm/Université Jean Monnet – Saint-Étienne).[2] Diseases related to the degradation of bone tissue.
TO CITE THIS POST :
Press release – Inserm press room Osteoporosis : balancing bone formation and degradation Link : https://presse.inserm.fr/en/osteoporosis-balancing-bone-formation-and-degradation/17727/