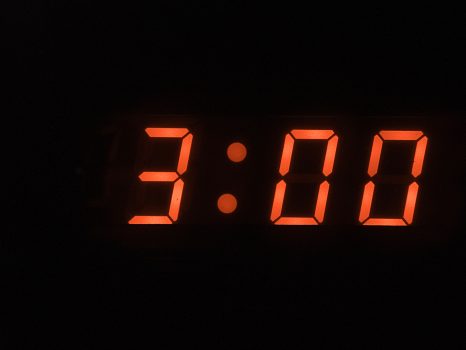 According to the findings of this study, pain intensity fluctuates over 24 hours, peaking at between 3 and 4 a.m. © Adobe Stock

As with many of the body’s functions, pain intensity is controlled by our internal clock. This is what a team of Inserm researchers at the Lyon Neuroscience Research Center (Inserm/Université Claude Bernard Lyon 1/CNRS) has recently discovered. They show that pain oscillates over 24 hours with a peak at night and a decrease in the afternoon, regardless of the sleep-wake cycle or any external stimulation. This discovery could lead to new approaches to how we treat pain. Their research has been published in Brain.

An internal clock set to a rhythm of around 24 hours regulates the activity level of numerous body functions: the sleep/wake system, body temperature, blood pressure, hormone production, heart rate, but also cognitive capacities, mood, and memory. To this long list, we can now add pain. Inserm researcher Claude Gronfier’s team at the Lyon Neuroscience Research Center has recently shown that this is indeed the case.

Pain intensity follows a sinusoidal curve over 24 hours with maximum intensity between 3 and 4 a.m. and minimum intensity around 3 and 4 p.m., regardless of behavior or external environmental factors.

To demonstrate this, the researchers studied twelve young adults in the laboratory under conditions of temporal isolation and constant routine. They kept them awake for 34 hours, cut off from external signals and environmental rhythms. There was no schedule, no meals at fixed times (but rather a snack every hour), no change in posture (semi-reclined position), and no activity/rest rhythm. The temperature and low light levels were both constant. The objective was to assess whether pain perception was rhythmic under these conditions, in order to be able to conclude that it was controlled by the internal clock.

In this situation, the researchers exposed the participants’ forearm to a heat source every two hours. The participants were asked both to indicate the point at which the stimulus became painful during the increase in temperature and to rate the intensity of the pain on a scale from 1 to 10 during the application of a temperature of 42, 44 or 46 degrees Celsius. These two complementary approaches were used to verify the consistency of the results.

The researchers observed in all the subjects that the painful sensation was rhythmic over the 24-hour period. “The findings are very homogenous with an extremely significant link,” explains Gronfier. They also observed a phenomenon claimed but undemonstrated by previous research in that sensitivity to pain increased in line with sleep debt: the greater the sleep debt, the greater the intensity of the pain felt.  “Sleep is often said to have a pain-relieving effect. But by modeling our findings mathematically, we show that the internal clock is responsible for 80 % of the variation in pain sensation over 24 hours, compared to only 20 % for sleep,” he explains.

This circadian variation in pain certainly has a physiological utility according to Gronfier. “We do not know why sensitivity is at its highest in the middle of the night. It could be that we have evolved to wake rapidly in the event of painful contact and avoid life-threatening situations. During the day, we are aware of our surroundings and more easily prone to injuries, so this warning signal may be less necessary. This discovery ties in with the concept of personalized medicine, and more specifically circadian medicine – an emerging field that takes into account biological rhythms in patient care.

“According to these findings, it is legitimate to believe that improving the synchronization of biological rhythms, sleep quality, or both in people suffering from chronic pain could help improve their therapeutic management, considers Gronfier. In addition, just like cancer chronotherapy has proven to be more effective and less toxic when drugs are administered at certain times of the day, tailoring pain relief according to the same process, in which the biological rhythm of each individual is taken into account, could increase its efficacy while reducing the dose needed and the potential side effects. However, this hypothesis remains to be validated by clinical trials before this chronobiological approach can be offered to patients,” he warns.