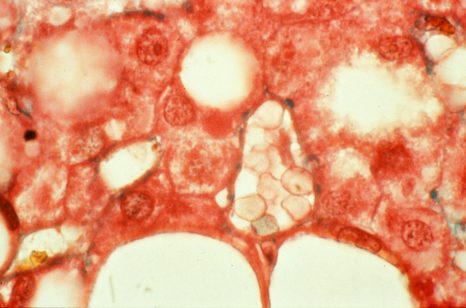 Detail of a steatosis, accumulation of a fat, triglyceride, in the liver cell. © Inserm/Hadchouel, Michelle

A research team from AP-HP, Inserm and Sorbonne University carried out work, within the IHU ICAN, on the effects of bariatric surgery on the severity of liver damage in patients with NASH (Non-Alcoholic Steatohepatitis or Metabolic Steatohepatitis) and severe fibrosis (bridge fibrosis or compensated cirrhosis). This study shows that in 50% of patients who underwent bariatric surgery, despite significant weight loss (20% to 30% of initial BMI) and improvement in metabolic risk factors (mainly type 2 diabetes), severe fibrosis persists in the medium term (5 years after surgery). The results of this work were published on January 25, 2022 in the journal Hepatology .

Obesity in France concerns 17% of the adult population and it increasingly affects children and adolescents. It has many consequences on the state of health of people who are affected, including the development of “fatty liver” (liver steatosis). Hepatic steatosis is defined by the accumulation of fat in liver cells favored by the presence of metabolic risk factors (particularly diabetes and obesity).

In France, liver steatosis affects 18% of the population and 25% of the general population worldwide. Eventually, this pathology, also called NASH, can lead to the appearance of more serious diseases such as cirrhosis or liver cancer. To date, there is no effective drug treatment for NASH, which makes research around other avenues of care for patients all the more important.

This study confirms the excellent results of bariatric surgery: overall, 29% of patients had normal histology at follow-up biopsy; 74% had NASH resolution without fibrosis progression; 70% had fibrosis regression.

Patients who do not respond to bariatric surgery have a lesser improvement in metabolic risk factors (less weight loss, remission of diabetes) even if clinically significant. The factors associated with the persistence of fibrosis after bariatric surgery, in addition to the follow-up interval, were age and type of surgery (less regression of fibrosis after the sleeve regardless of weight loss). The factors associated with the absence of liver lesions after bariatric surgery were greater weight loss, improved insulin resistance and less initial severity of necroinflammatory lesions.

Long COVID: When Symptoms Persist Months after the First Wave