Physical exercise to prevent the consequences of falls in older people

Well-designed physical exercise programmes may limit the risk of injury from falls in older people. According to an article published today by a team led by Patricia Dargent, Research Director at Inserm Unit 1018 (Centre for Research in Epidemiology and Population Health), not only can such exercise reduce the incidence of falls, it can also reduce their severity. For example, these programmes help to avoid hip fractures (neck of the femur), which require medical attention and lead to a loss of autonomy that is sometimes considerable in older people.

These results, obtained from a survey of the literature, have been published in The British Medical journal. 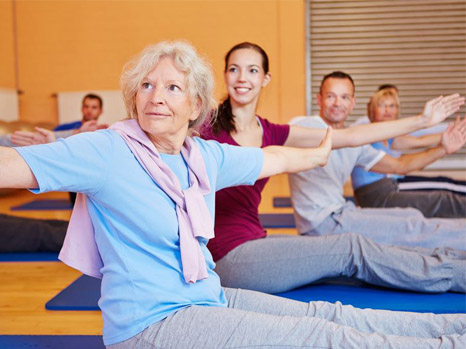 From a certain age, some activities that had seemed routine can easily cause an accident (slipping on a carpet, climbing a step-ladder to replace a light-bulb, etc.) Moreover, whereas a fall may be of no great consequence for a healthy individual (who gets away with a hefty bruise), it can turn out to be serious and disabling for an older person. These injuries are very common, and constitute a major cause of long-term pain and a reduction in the ability to function. They also increase the risk of loss of autonomy and the need for nursing-home care, which constitutes a high economic cost.

Although the effect of exercise on the prevention of falls had already been demonstrated, its impact on the incidence of serious injury had not been considered. The latter was analysed by the researchers at Inserm, who reviewed all existing programmes to see if they were associated with a significantly lower risk of fractures or other serious injuries.

Their study included 17 studies carried out all over the world, involving 2,195 participants who exercised, and 2,110 who did not (control groups). The mean age of participants in these programmes was 76 years, and 77% of these participants were women.

Results of the meta-analysis suggest that this type of programme helps to significantly reduce the incidence of falls leading to serious trauma, fracture, and/or requiring medical attention.

This study, the first of its kind, suggests that reducing the risk of falling, and improving the protective reflexes during a fall (such as putting out one’s hands to save oneself) by doing regular specific exercises might be a simple and feasible way to prevent fractures and other serious injuries in older people. The researchers see this as “additional evidence encouraging patients to participate in exercise programmes for falls prevention.”

Patricia Dargent’s team is currently conducting a research programme known as “Ossébo.” This is a randomised controlled study of physical exercise in the maintenance of balance and prevention of falls and fractures, and is being carried out on women aged 75 and over, living in their own homes. The initial results of this programme should be published in 2014.