Towards a new weapon against muscular dystrophy

Research efforts associating scientists from the CNRS, UVSQ and INSERM within the Laboratoire END-ICAP[1], working in collaboration with a team from the University of Bern, has demonstrated the therapeutic potential of a new class of synthetic oligonucleotides[2] in the treatment of Duchenne muscular dystrophy (DMD) using RNA “surgery”. Tested in the mouse, this new generation of molecules proved to be clinically superior to those currently under evaluation in DMD patients, notably for restoring cardio-respiratory and central nervous system function. These findings were published on 2 February 2015 in Nature Medicine. 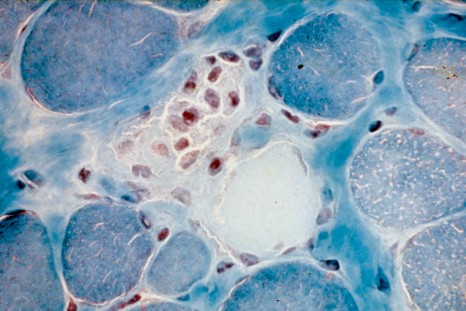 Neuromuscular diseases include several hundred conditions, mainly of genetic origin, which are defined by a defect in muscle control or the destruction of muscle tissue. Taken together, they affect tens of thousands of people in France, and represent a major public health challenge. The most emblematic of these conditions, Duchenne Muscular Dystrophy (DMD) is caused by mutations that affect the gene coding for dystrophin, a protein essential for the correct functioning of muscle cells. This particularly severe and disabling disease does not yet benefit from any satisfactory treatment.RNA “surgery” is an approach that has been developed in order to correct certain genetic abnormalities. This therapy is based on using small sequences of antisense oligonucleotides (AON)[3] that can bind to — and specifically act on — messenger RNA, and allow the synthesis of a missing protein. Several studies are underway to synthesize different types of AONs designed to act on dystrophin production. Despite the encouraging results of some clinical trials, existing AONs have limitations: their level of toxicity is sometimes high and they cannot act at the cardiac level or cross the blood-brain barrier. Designing a therapy that would be effective simultaneously for all skeletal muscles, the heart and the central nervous system, remains a challenge.The authors of this work have developed new nucleotides for AON synthesis: tricyclo-DNA (tcDNA). These AON-tcDNA, synthetic analogs of DNA, hybridize with target RNA and cause the excision of a fragment of RNA[4]. By acting on that part of the gene that carries an error, they allow the synthesis of a truncated — but stable and functional — dystrophin. The monitoring of DMD mice treated with these AON-tcDNA has shown that these analogs perform better than their previous equivalents. Administered intravenously, the AON-tcDNA are efficiently distributed throughout the skeletal muscle, and also reach the cardiac tissue and central nervous system, which was not the case for their predecessors. In addition, the restoration of dystrophin production is more effective than with previous AONs. After a twelve-week treatment, the mice displayed highly significant improvements, not only in muscle function but also in cardio-respiratory function, which are the principal targets in patients suffering from this neuromuscular disease.The scientists also demonstrated a correction of emotional responses, which are naturally exacerbated in DMD subjects and may cause learning disabilities and cognitive defects. This part of the study, performed in collaboration with a team from the Institut des Neurosciences Paris Saclay (CNRS/Université Paris-Sud), showed that dystrophin is crucial to the proper functioning of certain neurons and that the behavioral disorders observed in the context of a dystrophin deficit were at least partially reversible in adult mice with DMD.As well as these promising results, AON-tcDNA are characterized by a lengthy residence time within tissues, which in the future will allow treatments to be administered at longer intervals. Another advantage is that they are not degraded but gradually excreted by the body, thus making the treatment reversible and limiting its toxicity. The toxicological analyses required are still ongoing but their initial results suggest that these new AONs are well tolerated at high doses in mice.The mechanisms responsible for the efficacy of these third-generation AONs are still poorly understood but several of their properties may be involved, including notably their strong affinity for RNA and their ability to form “nanoparticle” aggregates in a spontaneous manner.

The chemistry of tcDNA thus opens numerous perspectives for their application in various genetic diseases. Above all, this is a new step towards a systemic drug therapy[5] for Duchenne muscular dystrophy.

Clinical trials in humans are scheduled within the next 18 to 24 months, in collaboration with the company, Synthena.This work was carried out as part of a large international collaborative project (ICE – International Collaborative Effort for DMD) at the initiative of the Monaco Association Against Muscular Dystrophy (AMM) and the Duchenne Parent Project France (DPP-F), and received partial support from the HandiMedEx Chair of Excellence under the French Investments for the Future (Investissements d’Avenir) program.
[1] Laboratoire END-ICAP: Handicap neuromusculaire: physiopathologie, biotechnologies et pharmacologies appliquées (UVSQ/Inserm) forms an integral part of the International Associated Laboratory for “Biotherapies Applied to Neuromuscular Disabilities” (LIA BAHN – UVSQ/CSM).

[2] Oligonucleotides are short segments of nucleic acids (RNA or DNA).

[3] These sequences are called antisense because they complement messenger RNA. The synthetic strand will thus have a sequence that is the reverse of that of the RNA strand.[4]  After the transcription of DNA into RNA, the latter undergo a number of changes, including splicing, during which non-coding fragments will be excluded in order to produce mature RNA used for translation into proteins.