Producing new neurones under all circumstances: a challenge that is just a mouse away ….

Improving neurone production in elderly persons presenting with a decline in cognition is a major challenge facing an ageing society and the emergence of neuro-degenerative conditions such as Alzheimer’s disease. INSERM and CEA researchers recently showed that the pharmacological blocking of the TGFβ molecule improves the production of new neurones in the mouse model. These results incentivise the development of targeted therapies enabling improved neurone production to alleviate cognitive decline in the elderly and reduce the cerebral lesions caused by radiotherapy.

The research is published in the journal EMBO Molecular Medicine. 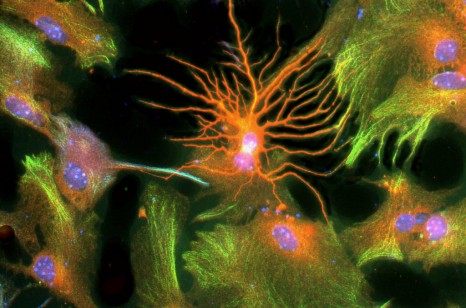 New neurones are formed regularly in the adult brain in order to guarantee that all our cognitive capacities are maintained. This neurogenesis may be adversely affected in various situations and especially:

– in the course of ageing,
– after radiotherapy treatment of a brain tumour. (The irradiation of certain areas of the brain is, in fact, a central adjunctive therapy for brain tumours in adults and children).

According to certain studies, the reduction in our “stock” of neurones contributes to an irreversible decline in cognition. In the mouse, for example, researchers reported that exposing the brain to radiation in the order of 15 Gy[1] is accompanied by disruption to the olfactive memory and a reduction in neurogenesis. The same happens in ageing in which a reduction in neurogenesis is associated with a loss of certain cognitive faculties. In patients receiving radiotherapy due to the removal of a brain tumour, the same phenomena can be observed.

Researchers are studying how to preserve the “neurone stock”. To do this, they have tried to discover which factors are responsible for the decline in neurogenesis.

Contrary to what might have been believed, their initial observations show that neither heavy doses of radiation nor ageing are responsible for the complete disappearance of the neural stem cells capable of producing neurones (and thus the origin of neurogenesis). Those that survive remain localised in a certain small area of the brain (the sub-ventricular zone (SVZ)). They nevertheless appear not to be capable of working correctly.

Additional experiments have made it possible to establish that in both situations, irradiation and ageing, high levels of the cytokine[2] TGFβ cause the stem cells to become dormant, increasing their susceptibility to apoptosis (PCD) and reducing the number of new neurones.

“Our study concluded that although neurogenesis reduced in ageing and after a high dose of radiation, many stem cells survive for several months, retaining their ‘stem’ characteristics”, explains Marc-Andre Mouthon, one of the main authors of the research, that was conducted in conjunction with José Piñeda and François Boussin.

The second part of the project demonstrated that pharmacological blocking of TGFβ restores the production of new neurones in irradiated or ageing mice.

For the researchers, these results will encourage the development of targeted therapies to block TGFβ in order to reduce the impact of brain lesions caused by radiotherapy and improving the production of neurones in the elderly presenting with a cognitive decline.

[1] Molecule synthetised by immune system cells that is essential for communication between cells.

[2] The radiotherapy dosage received by living tissue is measured in grays (Gy): 1Gy corresponds to a transfer of 1 joule per 1 kilogram of matter.

TO CITE THIS POST :
Press release – Inserm press room Producing new neurones under all circumstances: a challenge that is just a mouse away …. Link : https://presse.inserm.fr/en/producing-new-neurones-under-all-circumstances-a-challenge-that-is-just-a-mouse-away/7569/