Production of iPS cells: discovery of the 5th element

Since 2006, research has succeeded in generating, from specialised adult cells, induced pluripotent cells (iPS cells), with huge potential applications, particularly for regenerative medicine. However, the process has still not been completely mastered. Two teams of researchers from Inserm, CNRS, Centre Léon Bérard and Claude Bernard Lyon 1 University have discovered a molecule that may favour the production of these induced stem cells. Their work is published in Nature Communications, on 8 July 2015.

Reprogramming an already specialised cell into a stem cell is a scientific feat coveted by many researchers. In 2006, the Japanese scientist Shinya Yamanaka first succeeded in producing these “induced pluripotent cells,” known as iPS cells, capable of becoming any type of cell from the human body, by a process requiring the introduction of a cocktail of four genes into differentiated cells. Until now, only embryonic human cells possessed such a characteristic. iPS cells represent a promising advance. With their help, it should ultimately become possible to replace diseased organs with new organs derived from the patient’s own cells, thereby eliminating all risks of rejection. They would also circumvent the ethical problems raised by the use of cells from human embryos.

Despite this success, cell reprogramming is not yet fully controlled. It is limited by certain constraints, including the phenomenon of programmed cell death, which restricts the number of cells produced. In this context, Fabrice Lavial’s team, in collaboration with Patrick Mehlen’s team, sought to identify new regulators of the genesis of iPS cells.

With this objective, the researchers directed their attention to the factors affected by the four inducing genes involved in the initiation of reprogramming. They then selected from this list those known to have a role in programmed cell death, and with a level of expression that varies over the course of reprogramming. After this screening process, one molecule emerged: netrin-1.

Netrin-1 is a protein naturally secreted by the body. Interestingly, it is able to prevent programmed cell death, among other things. In the first days of reprogramming mouse cells, the researchers observed that their production of netrin-1 was strongly reduced. This deficit limited the efficacy of the process. The researchers then tested the artificial addition of netrin-1 to compensate for its insufficiency in the early phases of reprogramming.

This time, the quantity of iPS cells produced from mouse cells was much more greater. An observation repeated during study of human cells, from which fifteen times more iPS cells were produced by adding netrin-1.

From a therapeutic point of view, it was important to determine whether this treatment affected the quality of cell reprogramming.

“According to several verifications, netrin-1 treatment does not seem to have any impact on the genomic stability the iPS cells or on their ability to differentiate into other tissues,” says Fabrice Lavial, Inserm Research Fellow.

The team continues to test the effect of netrin-1 on the reprogramming of other types of cells, and is endeavouring to gain a better understanding of the mode of action of this molecule in stem cell physiology. 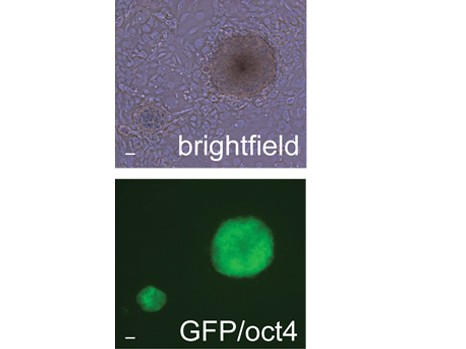