When Stress Weakens the Immune Defenses 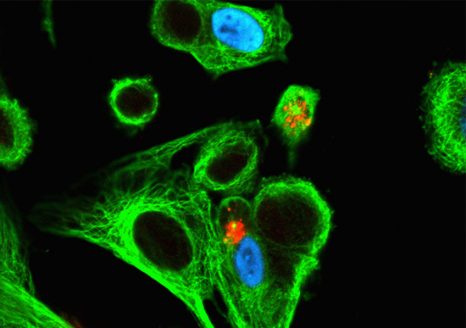 Cytomegalovirus (CMV) infection in a human being. In red and green, the natural killer (NK) cells try to make their way to the infected cell. Inserm/Jabrane-Ferrat, Nabila

In previous years, various studies have established a link between psychological stress and reduced immune defenses, but the mechanisms involved remained poorly elucidated. Sophie Ugolini, Inserm Research Director at the Center of Immunology Marseille-Luminy, and her colleagues at CNRS and Aix-Marseille Université have recently shown that such a link is to a large extent mediated by a type of receptor that binds to stress hormones: the β2-adrenergic receptor. Their findings have been published in Journal of Experimental Medicine.

For several years now, the scientific community has been interested in the effects of psychological stress on health. Studies have shown that when infection strikes, stress is linked to reduced immune defense system efficacy. With her team, Sophie Ugolini, Inserm Research Director at the Center of Immunology Marseille-Luminy (Inserm/CNRS/Aix-Marseille Université), has sought to explain the biological mechanisms behind this phenomenon. The researchers focused on receptors expressed on the surface of many of the body’s cells (including the immune cells) and which are specific to the stress hormones adrenaline and noradrenaline – the β2-adrenergic receptors.

To study their role, the team first reproduced a situation of chronic stress in mice by administering for seven days a molecule which, like the stress hormones, stimulates the β2-adrenergic receptors. They then exposed the animals to a virus from the herpes family, cytomegalovirus MCMV. The mortality rate of the “stressed” mice having received the molecule proved to be much higher than that of the untreated mice (90% versus 50%).

The researchers then evaluated the animals’ resistance to infection in the absence of these receptors. This involved taking mice that are genetically modified to be devoid of β2-adrenergic receptors and exposing them to cytomegalovirus. In these animals, the stress hormones could no longer bind to β2 receptors and as a consequence could no longer act. They presented much greater resistance to the viral infection (90% survival versus only 50% for the control mice). These initial findings therefore suggest that stimulation of the β2-adrenergic receptors by the stress hormones is responsible for the weakening of the immune system in situations of psychological stress.

In order to better understand the mechanisms involved, the team also analyzed the immune response of the mice devoid of β2-adrenergic receptors. They observed an increased production of inflammatory cytokines – molecules produced by the immune cells which promote the elimination of viruses.

“We have confirmed in an experimental setting that the stress hormones that bind to the β2-adrenergic receptors reduce immune response, which involves a decrease in the production of certain inflammatory cytokines required to eliminate viruses”, specifies Ugolini. According to the researcher, this study could open up new therapeutic avenues. “By targeting the β2-adrenergic receptor, it would in some disease settings be conceivable to deactivate the immune brakes triggered by states of stress”, she concludes.