What is at risk in the teenage drinker?

Alcohol addiction involves five million French people. It is currently very worrying to discover that more and more of the very young are drinking alcohol, and developing dangerous habits, such as that of binge drinking.

As part of the European AlcoBinge Project, coordinated by Mickaël Naassila’s team (INSERM Unit ERi 24), researchers used rats to explore the long-term effect of repeated intoxication during adolescence (the rat is considered to be an adolescent at 30 to 40 days from birth) and whether a predisposition and motivation to consume alcohol could lead to an addiction in adulthood.

The results published in the Neuropharmacology journal show that repeated intoxication during adolescence, before the brain has fully matured, produces a loss of control in alcohol consumption in the adult, resulting in long-term neurological changes.

From a behavioural point of view, the study headed by Mickaël Naassila shows that adult rats who were exposed to drunkenness early in their adolescence were more vulnerable to alcohol, and lost control of their consumption. They became desensitised to the negative properties specific to alcohol.

Again from the behavioural point of view, the INSERM researchers studied the incentive to consume alcohol in adult rats. The researchers showed for the first time and after performing numerous experiments involving rewards, that adult rats that had been exposed to alcohol earlier in their lives proved to have an excessive incentive to obtain alcohol.

From a neurological point of view, repeated intoxication during adolescence also produces changes inside the brain. The researchers showed that a very specific sub-region in the   nucleus accumbens, (the part of the brain that plays a leading role in addictive behaviour) becomes less reactive, in the long term, to re-exposure to alcohol. This could explain greater vulnerability when confronted with alcohol.

Although these are results produced from rats, they confirm that repeated intoxication in adolescence (reproducing the effect of binge drinking) renders adult subjects more vulnerable to alcohol and produce long-term neuro-adaptations. 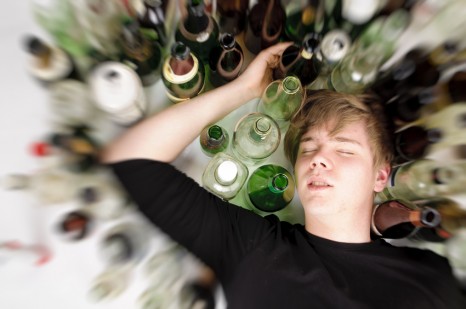 TO CITE THIS POST :
Inserm press room What is at risk in the teenage drinker? Link : https://presse.inserm.fr/en/what-is-at-risk-in-the-teenage-drinker/5956/