Florent de Vathaire, Research Director at Inserm (Epidemiology and Public Health Research Centre, Unit 1018 – University Paris-Sud, Institut Gustave Roussy, Villejuif) and his team have been studying the relation between doses of ionising radiation received to the pancreas during radiotherapy treatment for childhood cancer and the long-term risk of diabetes. The results of their research are published today in The Lancet Oncology 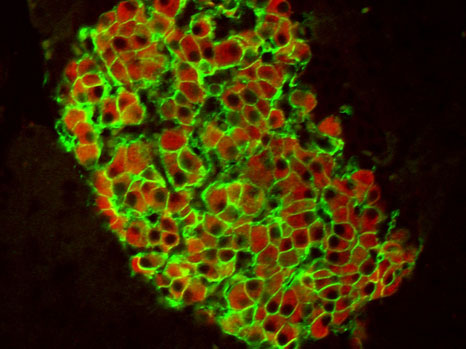 This study was based on analysis of a cohort of 2,500 people in France and the UK who were treated for childhood cancer before 1986, who have been well for at least 20 years, and who answered a detailed questionnaire on their state of health.

After an average monitoring period of 27 years, 65 of the childhood cancer survivors had developed diabetes.

This is the first study carried out on the relation between the radiation dose received to the pancreas, regardless of the source, and the risk of developing diabetes.

If confirmed by subsequent studies, the linear nature of the relation found by Florent de Vathaire and his co-researchers implies an increased risk of diabetes even for low and moderate doses and this is bound to have implications for public health.

[1] A Gray (Gy) is the international unit of measurement used for the radiation dose absorbed by the body. One Gray is the equivalent of a dose of 1 Joule of energy absorbed per kilogram.

TO CITE THIS POST :
Press release – Inserm press room Radiation dose to the pancreas and risk of diabetes mellitus in survivors of childhood cancer Link : https://presse.inserm.fr/en/radiation-dose-to-the-pancreas-and-risk-of-diabetes-mellitus-in-survivors-of-childhood-cancer/3162/