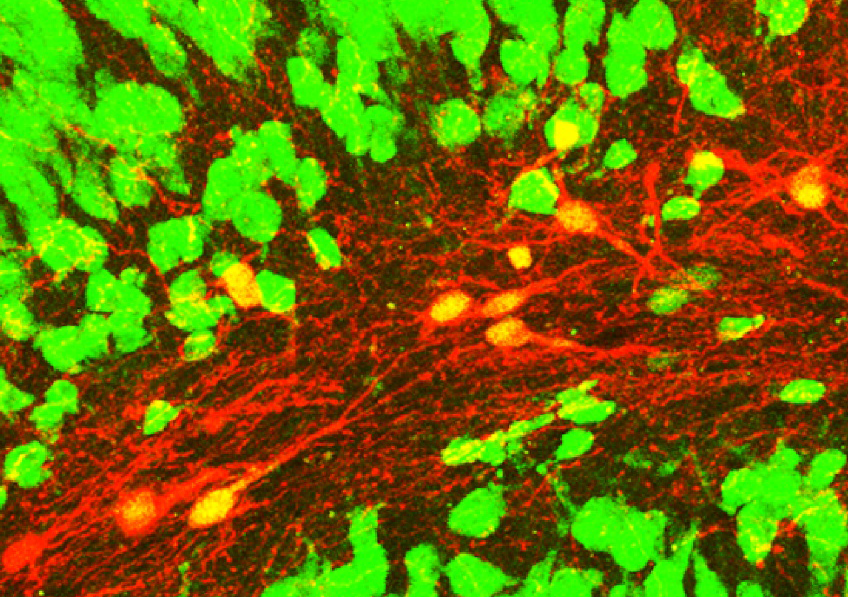 Many central nervous system diseases are associated with the death of neurons without the brain being able to regenerate them. A phenomenon that is observed particularly in Parkinson’s disease, Alzheimer’s disease, following stroke, and in some forms of epilepsy. How can lost neurons be regenerated? This question has been tackled by a team of researchers from Inserm, CNRS and Université Claude Bernard Lyon 1 at the Stem Cell and Brain Research Institute, in collaboration with King’s College London. Using an animal model of epilepsy, the researchers have succeeded in transforming non-neuronal cells in the brain into new inhibitory neurons that reduce chronic epileptic activity by half. This research will in time make it possible to envisage a therapeutic application of this strategy. The findings of this study have been published in Cell Stem Cell.

Our brain generally lacks the regenerative capacity to replace lost or damaged neurons. The goal of regenerative medicine is to replace lost cells in order to correct the functional disorders associated with that loss. Direct cell reprogramming (as opposed to induced pluripotent stem cell reprogramming) has emerged as an innovative strategy that consists of “reprogramming” the identity of certain non-neuronal cells present within the affected brain to transform them into neurons. If this strategy is to be effective, many challenges need to be addressed. The new neurons must be integrated into the networks of surviving neurons and take over from those they replace in order to correct the pathological disorders.

This was the strategy explored in a new study published in the journal Cell Stem Cell. A team of researchers from Inserm, CNRS and Université de Lyon have succeeded in transforming glial cells of the brain into new neurons in a mouse model with mesial temporal lobe epilepsy, the most common form of drug-resistant epilepsy in humans.

Proliferation of glial cells: a cell source from which to generate neurons

In neuronal death, as observed in mesial temporal lobe epilepsy, the most common form of adult focal epilepsy, the glial cells present in the direct environment of the damaged neurons react by multiplying themselves, albeit without resolving the problem.

In the study, the researchers had the idea of taking advantage of this proliferation and using these extra glial cells. First, they had to identify genes making it possible to transform these glial cells into inhibitory neurons, whose loss plays a key role in the onset of seizures, in order to restore the balance of the neuronal activities that had been affected. The researchers therefore selected genes known for being involved in the genesis of these inhibitory neurons during development.

By forcing the expression of these genes, they were able to reprogram the identity of the glial cells to make them so-called “induced neurons” whose properties are comparable to those lost in the disease. Through stereotactic surgery[1], the genes were inserted directly into the brains of the mice at the sites of origin of the epilepsy using deactivated viral vectors that induce reprogramming of the glial cells. Within a few weeks, the vast majority of these gene-treated glial cells had transformed into new neurons.

The results of the study show that the induced neurons adopt an identity of inhibitory neurons that present a set of molecular characteristics comparable to those of neurons having degenerated in epilepsy.

Using electrophysiological recordings, the scientists were able to confirm that they were indeed functional neurons, capable of inhibiting the neighboring neurons responsible for seizures, thereby reducing their activity. Then, by tracing connections between the neurons, they were able to determine that the induced neurons were fully integrated into the epileptic network but also more broadly in the brain.

Finally, thanks to electroencephalographic (EEG) recordings in the sites of origin of the seizures, the researchers were able to show, in the reprogrammed mice, that the seizures had reduced by half.

“These findings reveal the therapeutic potential of this cell reprogramming strategy in fighting a pathology such as mesial temporal lobe epilepsy. This represents a blessing in the specific case of this disease at a time when 30% of patients are refractory to pharmacological treatments,” explains Christophe Heinrich, the study’s designer.

Even if much remains to be done before this research can truly be applied to the treatment of patients, this study highlights the reprogramming of glial cells into neurons as a new strategy capable of modifying not just a disease such as epilepsy, but which also could be expanded to include other devastating brain diseases.

[1] Neurosurgery technique that uses a system of 3D coordinates in space for the precision-access of brain regions.