Schizophrenia: the link between personality disorders and the perception of time 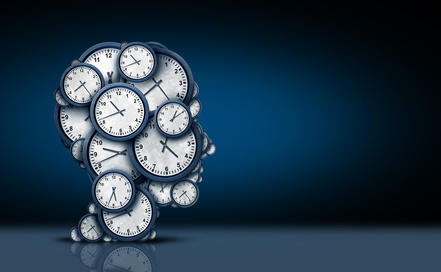 A recent study conducted by Anne Giersch and her team of researchers (Inserm Unit 1114 /University of Strasbourg) showed that some people with schizophrenia are unable to perceive and anticipate the passage of time. These results, published in the Scientific Reports journal, also reveal a link between fragile temporal prediction and minimal self disorders (self-perception, “I am here, now”).

Schizophrenia is a psychiatric disease that affects about 0.7% of the world population, which includes 600,000 people in France. The disease, which most often appears in adolescents between the ages of 15 and 25, can be diagnosed in the following two ways: clinical symptoms (hallucinations, delusions, disorganization, etc.), and cognitive and neurobiological disorders.

A recent study conducted by Anne Giersch of the “Cognitive Neuropsychology and Physiopathology of Schizophrenia” Inserm Unit, located in Strasbourg, tested 28 patients with schizophrenia and 24 healthy subjects. Scientists have sought to demonstrate a link between the perception of “self” and “time”. Together, these two perceptions help us understand our experience as it is lived in time.

The Strasbourg group first ran a cognitive test to study each subject’s temporal prediction.  This type of prediction, for example, makes one ready to press the accelerator before a light turns green. More broadly, it allows us to bridge isolated events, and to create a feeling of temporal continuity, which is crucial for stability and the continuity of subjective life. In some people suffering from schizophrenia, a fragile temporal prediction was observed.  During cognitive tests, the passage of time allowed one to prepare a response, but some patients with schizophrenia cannot do so.

The patients were subsequently evaluated on a phenomenological scale (study of experiences reported by the patients), in order to detect minimal self disorders. Personality disorders and the dissolution of the self awareness are frequent symptoms of schizophrenia.  The latter, for example, attribute thoughts or actions to people other than themselves, which leads to a confusion between “self” and “others”.  Researchers observed that the patients who suffered the most from minimal self disorders were also those who had the most trouble anticipating the passage of time.  These results therefore reinforce the hypothesis of a link between fragile prediction (cognitive disorders) and minimal self disorders (clinical symptoms).

“The purpose is to determine the neurological foundations of temporal prediction. By studying the source of the problem, we will come to better understand the origin of the clinical symptoms of schizophrenia”, concluded Anne Giersch.

TO CITE THIS POST :
Press release – Inserm press room Schizophrenia: the link between personality disorders and the perception of time Link : https://presse.inserm.fr/en/francais-schizophrenie-lien-entre-troubles-de-la-personnalite-et-perception-du-temps/29273/