The Sentinelles network, developed by Inserm and Pierre and Marie Curie University (UPMC), is a national surveillance system made up of 1,300 general practitioners and about a hundred private paediatricians, which allows the creation of large databases for several diseases, for purposes of health monitoring and research.

The Sentinelles physicians collect information from their patients on 8 health indicators, and submit it via the Internet. Analysis of these data allows estimation of the weekly incidence rate for each indicator, so that changes in these indicators can be monitored on the territory in real time.

According to the Sentinelles network’s weekly bulletin of 16 December, cases of gastroenteritis are up slightly in metropolitan France. 110,500 new cases were seen during visits to general practitioners last week. The incidence rate, estimated at 171 cases per 100,000 inhabitants, is, however, below the epidemic threshold. At regional level, Limousin, Aquitaine and Auvergne observed the highest incidence rates.

Spread of chickenpox remains moderate on the territory, with 22 cases per 100,000 inhabitants, with the most severely affected foci to be found in Picardy, Upper Normandy and Poitou-Charentes. For influenza, the incidence rate is well below the epidemic threshold. 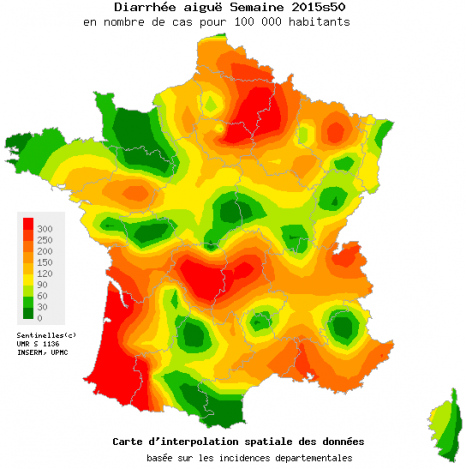