Septicaemia is a general inflammatory reaction secondary to an infection. Bacteria discharge into the blood, leading to fever, an increased heart rate, a drop in blood pressure, an increased breathing rate, and a pronounced fatigue of the body. Septicaemia is associated with significant mortality as it effects all of the organs. In France, it is estimated that there are around 70,000 cases of septicaemia per year with nearly 30,000 deaths, at a total cost of 2.8 billion euros.

The kidney lesions caused by septicaemia have been studied by Doctors Benjamin Chousterman and Alexandre Boissonnas in work performed in the Centre for Infectious Diseases and Immunology in Paris (Inserm/UPMC/CNRS) headed by Christophe Combadière, director of research at Inserm – in partnership with Prof. Didier Payen (Intensive care unit, Lariboisière hospital).

In an article published in the Journal of the American Society of Nephrology, the research team showed that certain white blood cells activated during the immune response (the monocytes) have a protective effect on the kidney tissue of mouse models of septicaemia. 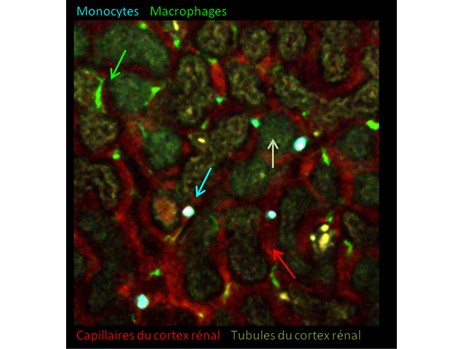 Monocyte infiltration in a mouse model of septicaemia ©Inserm/Christophe Combadière

The protective effect would be induced by the adhesion of the monocytes to the site of the infection, in this case the kidney tissue. It is the activation of the “CX3CR1” monocyte receptor by the alarm signals – the “cytokines” produced at the site of infection – which reinforces this adhesion. A detailed analysis of the CX3CR1 gene variant in patients with septicaemia showed that the presence of allele I249 improves monocyte adhesion. The researchers found that, in these patients, the number of cases presenting an acute kidney failure was lower.

Receptor CX3CR1 would provide a prime target for therapies aiming to prevent organ failure during septicaemia. The results also highlight the protective function of monocytes, which to date have seldom been studied.