Serotonin, a well-known brain neurotransmitter, is produced locally in an unexpected place: the bone tissue. This has just been demonstrated by research scientists from the Combined “Bone and joints” research unit 606 (Inserm/Paris Diderot) working jointly with the biochemistry laboratory from the Lariboisière Hospital and the “Cytokines, hematopoiesis and immune response” laboratory (CNRS/University of Paris Descartes) at the Necker Hospital in Paris. Apparently, this locally produced serotonin breaks down the bone tissue. These results, published in the PNAS, suggest that medications that modulate the effects of serotonin, such as anti-depressants or migraine drugs, could in one way or the other modify the delicate balance between the formation and the destruction of bone in the organism. 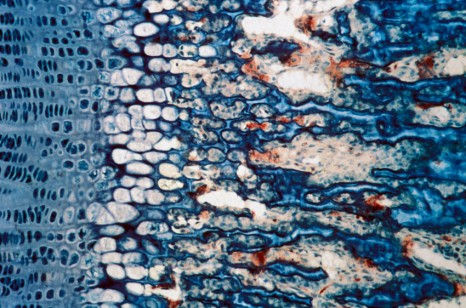 Area showing bone growth and resorption. The osteoclasts, the cells that resorb bone, are shown in red.

Serotonin regulates a wide variety of functions such as mood, behavior, sleep, blood pressure and temperature regulation. It also ensures important functions in several peripheral tissues and regulates vascular and heart functions and gastro-intestinal motility. However only minute levels of serotonin circulate in the body. It is mainly stored in the platelets and is only available for the peripheral organs if it is degorged when the platelets are activated.

Certain researchers decided to look into the effect of serotonin on bone tissue that had been the subject of a recent debate. While some researchers described the negative action of the serotonin circulating in the bone tissue (it apparently prevents bone regeneration by acting on the osteoclasts and reducing their proliferation), others failed to observe any modification to the bones in serotonin-deficient mice.

If this balance is disturbed, excessive activity of the osteoclasts might lead to a marked increase in bone density. On the other hand, increased bone resorption is associated with bone loss and triggers off disorders such as osteoporosis, arthritis and metastatic bone lesions.

So, correct molecular communication between osteoblasts and osteoclasts is necessary in order to regulate the engagement, the proliferation and the differentiation of precursor bone cells.

In view of these contradictory results, Marie Christine De Vernejoul and her colleagues decided to look deeper into this. Thanks to their work with mice, they discovered that this effect on bone tissue was not caused by the circulating serotonin, but to a new serotonin production. “Our work shows that serotonin is produced locally in an unexpected place: bone tissue. It is synthesized by the osteoclasts, the bone cells that resorb bone,” explained the Inserm researcher Marie-Christine De Vernejoul.

Once synthesized, serotonin acts directly on the osteoclasts, the cells that produce it, by increasing their differentiation. This local serotonin production is part of a normal process that also helps to maintain the balance between bone destruction and formation.

“This local serotonin produced by the osteoclasts is much more important for the bone tissue that the circulating serotonin, which seems to explain the different conclusions observed up until now by scientists who had studied to restrictive models” add the writers.

From a functional point of view, the research scientists have discovered that osteoclasts express the serotonin transporter and certain serotonin receptors at their surface. Therefore it seems that drugs that affect the serotonin transporter, such as antidepressants, and serotonin receptors such as migraine drugs, could modify the breakdown of bone tissue and affect this precious balance between bone destruction and bone formation.

At this stage in the research, many perspectives are open to the researchers workers. They are now going to study whether the production of serotonin by the osteoclasts is increased by a lack of estrogen. If this is the case, this could indicate that serotonin plays a part in osteoporosis in post-menopausal women.