The iCub humanoid robot on which the team directed by Peter Ford Dominey, CNRS Director of Research at Inserm Unit 846 known as the “Institut pour les cellules souches et cerveau de Lyon” [Lyon Institute for Stem Cell and Brain Research] (Inserm, CNRS, Université Claude Bernard Lyon 1) has been working for many years will now be able to understand what is being said to it and even anticipate the end of a sentence. This technological prowess was made possible by the development of a “simplified artificial brain” that reproduces certain types of so-called “recurrent” connections observed in the human brain. The artificial brain system enables the robot to learn, and subsequently understand, new sentences containing a new grammatical structure. It can link two sentences together and even predict how a sentence will end before it is uttered. This research has been published in the Plos One journal. 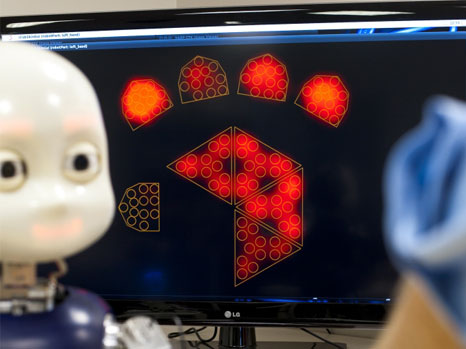 INSERM and CNRS researchers and the Université Lyon 1 have succeeded in developing an “artificial neuronal network” constructed on the basis of a fundamental principle of the workings of the human brain, namely its ability to learn a new language. The model was developed after years of research in the INSERM 846 Unit of the Institut de recherche sur les cellules souches et cerveau, through studying the structure of the human brain and understanding the mechanisms used for learning.

One of the most remarkable aspects of language-processing is the speed at which it is performed. For example, the human brain processes the first words of a sentence in real time and anticipates what follows, thus improving the speed with which humans process information. Still in real time, the brain continually revises its predictions through interaction between new information and a previously created context. The region inside the brain linking the frontal cortex and the striatum plays a crucial role in this process.

Based on this research, Peter Ford Dominey and his team have developed an “artificial brain” that uses a “neuronal construction” similar to that used by the human brain.

Thanks to so-called recurrent construction (with connections that create locally recurring loops) this artificial brain system can understand new sentences having a new grammatical structure. It is capable of linking two sentences and can even predict the end of a sentence before it is provided.

To put this advance into a real-life situation, the INSERM researchers incorporated this new brain into the iCub humanoid robot.

In a video demonstration, a researcher asks the iCub robot to point to a guitar (shown in the form of blue object) then asking it to move a violin to the left (shown by a red object). Before performing the task, the robot repeats the sentence and explains that it has fully understood what it has been asked to do.

For researchers, the contribution that this makes to research into certain diseases is of major importance. This system can be used to understand better the way in which the brain processes language. “We know that when an unexpected word occurs in a sentence, the brain reacts in a particular way. These reactions could hitherto be recorded by sensors placed on the scalp”, explains Peter Ford Dominey. The model developed by Dr Xavier Hinaut and Dr Peter Ford Dominey makes it possible to identify the source of these responses in the brain. If this model, based on the organisation of the cerebral cortex, is accurate, it could contribute to possible linguistic malfunctions in Parkinson’s disease.

This research has another important implication, that of contributing to the ability of robots to learn a language one day. “At present, engineers are simply unable to program all of the knowledge required in a robot. We now know that the way in which robots acquire their knowledge of the world could be partially achieved through a learning process – in the same way as children”, explains Peter Ford Dominey. 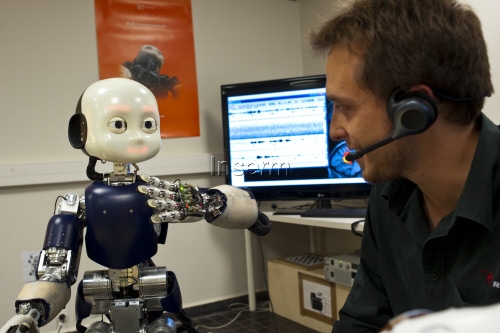