Stroke (CVA) in young adults: discovery of a susceptibility gene associated with bleeding of the cervical arteries

Researchers from the joint research unit “Public health and molecular epidemiology of aging related diseases” (Inserm/Institut Pasteur Lille/Université Lille 2), in collaboration with Lille Regional University Hospital (CHRU), have discovered a susceptibility gene involved in this major cause of stroke (cerebrovascular accident) in young subjects. This gene, PHACTR1, is also known to be associated with the occurrence of migraine and myocardial infarction. This international study, carried out by the CADISP[1] international consortium and published in the journal Nature Genetics, shows that a form of the gene is associated with a reduced risk of developing a dissection of the cervical arteries responsible for the bleeding that leads to stroke. This work opens up new possibilities for identifying people at risk, and trying to prevent the occurrence of stroke in young adults. 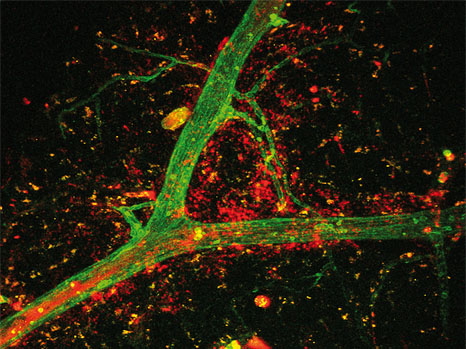 Cervical artery dissection is a major cause of stroke in young subjects. It involves bleeding within the lining of the carotid or vertebral artery walls, which causes longitudinal “splitting” (hence the term dissection) without rupturing the vessel. This bleeding gives rise to a haematoma, which reduces the diameter of the artery and may lead to its closure. Often, the formation of a blood clot inside the artery thus completely stops the flow of blood to the brain, resulting in a cerebrovascular accident, or stroke.

The causes of these dissections are still unknown. The current prevailing hypothesis is of a multifactorial disease, possibly related to a pre-existing abnormality in the elasticity of the blood vessel walls. We observe associated factors in these patients, such as migraine, high blood pressure, infections or recent, sometimes minor, trauma (carrying heavy loads, a fall from a bicycle, neck extension due to acceleration in some roller-coaster rides, blows to the nape of the neck, etc.). In the vast majority of cases, cervical artery dissection occurs in the absence of any family history or underlying hereditary disease. However, several hypotheses favour individual susceptibility to arterial dissection, encoded by the genome. This was the context for launching the CADISP consortium, in order to initiate the largest study ever conducted in the area, and thereby systematically screen our genome and discover the basis for this individual genetic susceptibility.

A total of twelve countries, comprising ten European countries, the United States and Russia, were able to bring together 2,052 patients with dissection, and compare their genomes with those of 17,064 unaffected individuals. The researchers and physicians were able to demonstrate that a particular form of the PHACTR1 gene was associated with a reduced risk of developing a cervical artery dissection. This same form of the PHACTR1 gene has been associated with a reduced risk of migraine and an increased risk of myocardial infarction in other studies. The researchers also identified two other genes that are potentially associated with the risk of dissection: the LRP1 gene, already associated with migraine and abdominal aorta aneurysm, and the LNX1 gene, both of which need further confirmation.

“Given the difficult diagnosis and seriousness of this disease, the characterisation of the genetic susceptibility gene PHACTR1 will help to provide a better understanding of the mechanisms leading to the occurrence of these dissections,” explains Stéphanie Debette, neurologist, first author of the article and coordinator of the CADISP international consortium.

“By pooling research efforts on a worldwide scale, we hope to succeed in more rapidly identifying people at risk, and find solutions in order to prevent the main functional consequences associated with the occurrence of stroke in the young adult,” concludes Philippe Amouyel, epidemiologist, director of the joint research unit involving Inserm, Institut Pasteur Lille and Université Lille 2.

These results have been obtained with the help of all the clinicians and their patients, and the genotyping and analysis facilities of the French National Genotyping Centre of the French Atomic Energy and Alternative Energies Commission (CEA), the Human Polymorphism Study Center (CEPH) and the Institut Pasteur Lille.

To find out more :

Cervical artery dissection: what are the signs?This pathological phenomenon affects young adults, both men and women, around the age of 40 years, with few or no vascular risk factors. It presents as pain at the location of dissection, generally in the neck region, or unusual headaches. In most cases, concurrently or in the following hours, characteristic symptoms of stroke (paralysis, loss of sensation, loss of speech, reduced field of vision, etc.) appear. The frequency of these dissections is approximately 2.5 to 3 per 100,000 inhabitants per year, which makes it a rare disease, and now thought to be underestimated.