Precisely how do we distinguish the texture of objects by touch? This is what has just been decoded by a study led by Clément Léna, research director at Inserm and Daniela Popa, a researcher at Inserm in Mixed Research Unit 1024: Biology Institute, École Normale Supérieure (Inserm, ENS, CNRS) and published in the journal Nature Neuroscience. Interactions between several regions of the brain that have until now not been identified are responsible for adjusting movement and refining our sense of touch.

To achieve this result, the researcher studied the sense of touch in mice. This sense is very developed in nocturnal rodents who have a mediocre sense of sight but use their vibrissae (something like long mobile whiskers) to explore their environment by feel. In mice, the cerebral areas dedicated to sensations of touch from the vibrissae are proportionally as large as those for sensations of touch from the hands in humans. The highly sensitive vibrissae, just like the hands of primates, enable the perception of textures, forms and dimensions thanks to an extremely precise control of their movements. 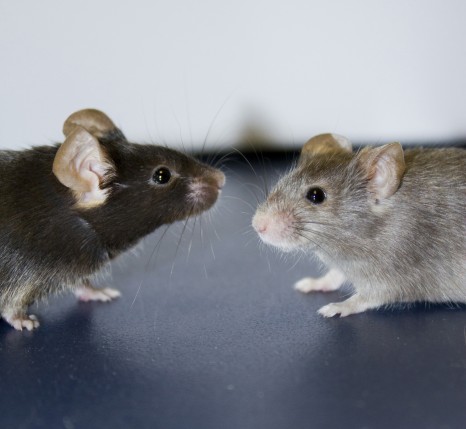 By stimulating the cerebral zones of mice using optogenetics[1], the researchers have revealed the existence of a functional circuit between the cerebellum and sensory and motor cortices. When this circuit no longer functions, mice can no longer explore their environment correctly or brush against objects in a precise manner, which changes their perception of the environment.

‘The loops of the circuit enable the cerebellum, which is a key cerebral zone, to constantly adjust the signals of the sensorimotor cortex. The movements of the body (the vibrissae in mice and fingers in humans) are then adapted in order to touch objects precisely. This is what makes us capable of distinguishing what we are touching and of perceiving the texture of a surface by stroking it, without making rough movements,’ explained Clément Léna, research director at Inserm.

The research team is now interested in the functioning of this circuit, which connects the cerebellum and the cortex, in diseases where the motor functions are altered such as Parkinson’s disease and dystonias[2]. ‘The tools that we are developing in the laboratory should make it possible to advance our understanding of these diseases and the development of symptomatic treatments,’ believes Daniela Popa, a researcher at Inserm and co-author of these projects.

Cerebral connections between the cortex and the cerebellum, enabling tactile exploration. The motor (red) and somatosensory (yellow) cortices are connected to the cerebellum (green) via the pons (green). The cerebellar nuclei (blue) project in return toward the motor cortices via the thalamus (violet). This closed loop is necessary for generating the fine movements used during tactile exploration (light touching, palpation). © Inserm/C. Léna

[1]              Technique enabling the stimulation with light of neurons that have been sensitised using genetic methods.

[2]              Diseases characterised by involuntary movements of the muscles of one or several parts of the body, often involving a torsion or distortion of this part.