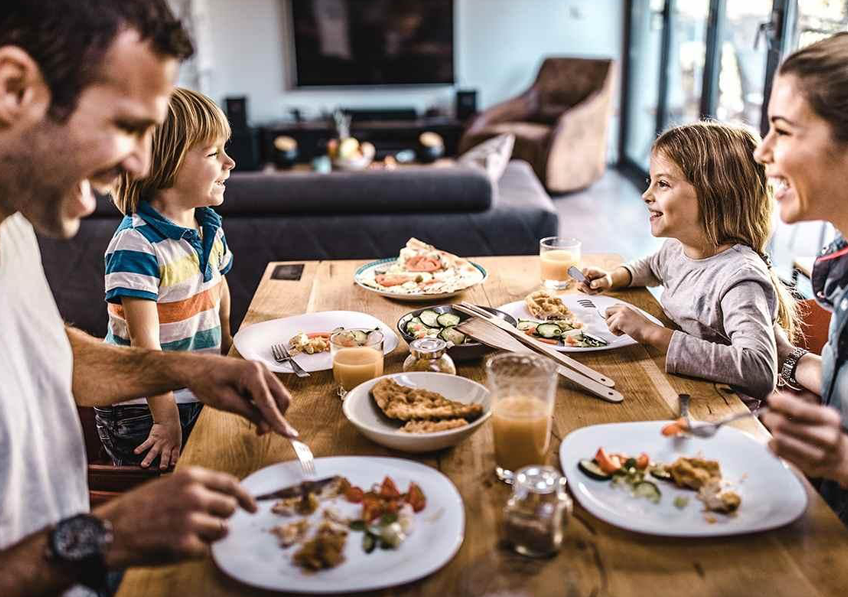 Between 3 and 6 years of age, children spend an average of around 2 hours a day in front of screens. © iStock – skynesher

Between 3 and 6 years of age, children spend an average of around 2 hours a day in front of screens[1]. While many researchers have identified links between screen time and cognitive development in children, few have looked at the context in which screens are used. Inserm researchers at the Center of Research in Epidemiology and Statistics – Université de Paris (CRESS) have identified a link between the television being on all the time during family meals and poorer language development. Their findings have been published in Scientific Reports.

Language is a social practice and human interaction plays an important role in its acquisition. Language development in children is therefore greatly influenced by their immediate environment, namely the interactions they have with their parents, siblings, and other children. Over the last few decades, screens have become an essential part of this environment. Even preschoolers spend a considerable amount of time in front of them.

Thanks to the follow-up over several years of children from the French cohort EDEN[2], researchers from Inserm and Université de Paris have been able to measure the amount of screen time and more specifically the frequency of exposure during family meals, which are key moments of verbal interaction between adults and children. Language assessments were conducted alongside this to identify how the context of screen exposure may influence language development in children.

In order to measure the times and contexts of screen use, questionnaires were completed by the parents of the 1,562 children in the cohort followed up at 2, 3, and 5.5 years of age. In the study, the parents noted how often the television was on during meals. For the children’s screen time, only the time spent in front of the television, computer, and playing video games was taken into consideration.

The children’s language development was assessed by questionnaires completed by the parents when the children were 2 years old[3], and then by psychologists when they reached 3 and 5.5 years of age. In order to consider the potential role played by other factors, several other variables were included in the statistical analysis, such as family socioeconomic characteristics (income, parental level of education, etc.) and child-related characteristics (sex, childcare arrangements, activities with parents, etc.).

Cross-tabulation of these data revealed that the more the television was on (whether watched or simply used as a sound or image backdrop) during family meals, the poorer the language outcomes. In contrast, the children’s language did not appear to be directly related to the amount of time spent in front of screens.

In an approach looking at the temporality between screen exposure and language development, the verbal IQ tested at 5.5 years of age was found to be lower in children who were always exposed to television during family meals at 2 years of age compared to those who were never exposed (mean difference of 3 IQ points). These results therefore encourage us to take better account of the context of screen exposure, and not just the duration.

“Although children are exposed to language through cartoons and other programs viewed on screens, verbal interaction between adult and child is strongly associated with better child language development. Having the television on during meals can therefore act as a brake on children’s verbal interactions, reducing both the quality and quantity of exchanges between children and adults,” explains Jonathan Bernard, Inserm researcher and co-author of the study.

Having the television on during family meals can affect both the child, by distracting him or her, and the parents, by diverting the conversations with their children.

Auditory and visual stimuli can increase distractions for children and parents in their home environment and make it more difficult for a child to extract from the background soundscape the phonological distinctions and syntactic features of the language needed for quality learning.

[2] The Eden cohort was created from the recruitment of 2,002 pregnant women between 2003 and 2006 in the public maternity hospitals of Poitiers and Nancy. EDEN is the first generalist cohort study conducted in France on early pre- and post-natal determinants of child health and psychomotor development.

[4] Exposure to television during family meals was assessed repeatedly at all three ages with the following question: “How often is the television on in the dining room when the child is eating at home?” with four response items: never, sometimes, often, or always.

U1153 Center for Research in Epidemiology and Statistics (CRESS)