The ‘appetite-suppressing’ effect of proteins explained

Frequently recommended in weight-loss diets, dietary proteins have proven effectiveness thanks to their appetite-suppressing effects. A team led by Gilles Mithieux, Director of Inserm’s Unit 855 “Nutrition and the Brain” in Lyon, has managed to explain the biological mechanisms behind these properties. The researchers describe in detail the chain reactions triggered by digesting proteins, sending a ‘satiety’ message to the brain long after a meal. Their results, published on 5 July in the Cell review, will make it possible envisage improved care for obese or overweight patients.

The team of researchers from Inserm, CNRS(2) and the Université Clause Bernard Lyon 1 has managed to shed light on the sensation of fullness experienced several hours after a protein-rich meal. This sensation is explained by messages exchanged between the digestive system and the brain, initiated by the dietary proteins that are mainly found in meat, fish, eggs or even some cereal-based products.

In previous studies, researchers proved that consuming dietary proteins triggers glucose synthesis in the intestine, after periods of food assimilation (a function known as gluconeogenesis). The glucose that is released in the blood circulation (portal vein) is detected by the nervous system, which sends an “appetite-suppressing” signal to the brain. Best-known in the liver and kidneys from which it supplies other organs with sugar, gluconeogenesis in the intestine sends an “appetite-suppressing” message after meals, characteristic of the sensation of “fullness”.

In this new study, the researchers managed to accurately describe how digesting proteins triggers a double-loop of chain reactions involving the ventral (via the vagus nerve) and dorsal (via the spinal cord) peripheral nervous systems.

The in-depth study of biological mechanisms identified the specific receptors (μ-opioid receptors [1]) found in the portal vein nervous system, at the outlet of the intestine. These receptors are inhibited by oligo-peptides, produced during protein digestion.

In an initial phase, the oglio-peptides act upon the μ-opioid receptors, which send a message through the vagus nerve and the spinal chord to areas of the brain specially-designed to receive these messages.

During a second phase, the brain sends a return-message that triggers gluconeogenesis via the intestine. The intestine then sends the “appetite-suppressing” message to areas of the brain that control food intake, such as the hypothalamus 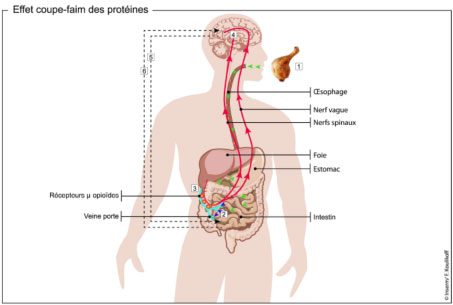 3 Recognition of oligo-peptides by μ-opioid receptors

Identifying these receptors and their role in intestinal gluconeogenesis paves the way to explore new avenues for the treatment of obesity. The challenge is now to determine how to act on the μ-opioid receptors to control the fullness sensation over long periods. According to Gilles Mithieux, the leading author in the study: “If used too intensely, these receptors may become insensitive. A means of inhibiting them ‘moderately’ must be found, thus retaining their long-term beneficial effects on controlling food intake”.

[1]Receptors recognized in the brain for their role in the nervous system in terms of feelings of pleasure, particularly the pain relief effects of morphine.