The latest trends in healthy life expectancy in the European Union

A key priority for the European Union is to ensure its ageing population keeps as healthy as possible and it has set a target to increase the number of healthy life years (HLY) by 2 years from 2010 to 2020. The European Joint Action on “healthy life years” (EHLEIS) coordinated by the National Institute of Health and Medical Research (INSERM, France), the Member States and the European Commission together monitor and analyze trends in health expectancies in Europe. The latest results on healthy life expectancy at age 65 years and above will be revealed at the second annual meeting of EHLEIS in Paris on Thursday, April 18, 2013 (Salle Pierre Laroque, 14, Avenue Duquesne – 75007 PARIS at 13:30) at the invitation of the French Ministry of Health. 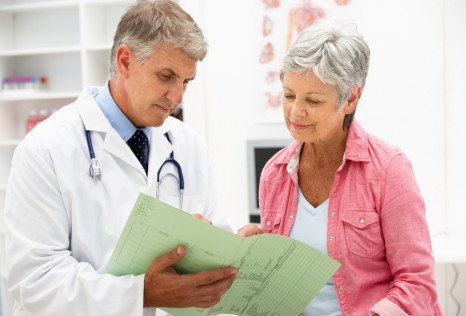 • Life expectancy in good perceived health (years lived where people perceive themselves in good or very good health) has also significantly increased since 2005, by 1.5 years for men and 1.6 years for women, more than the increases in life expectancy.

. Again this means that the number of years lived with chronic illness increased between 2005 and 2011. These apparently contradictory results might be explained by better management of health problems and/or associated disability (activity limitations), so that the health problems and disability associated with increases in life expectancy at age 65 have not generated an increase lower quality of life. It is likely that people, better informed today about their actual health status, report more chronic health problems and at earlier stages. 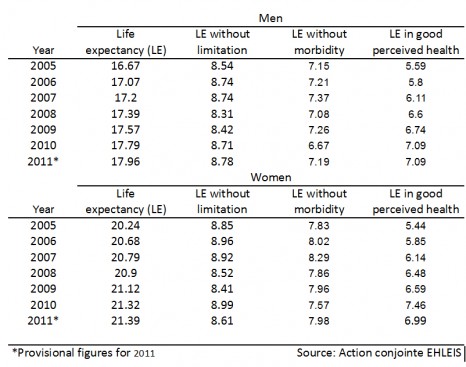 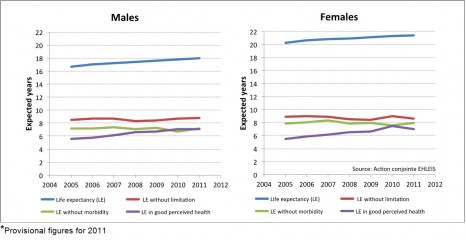 The HLY (Healthy Life Years) is an important European policy indicator and was selected as part of the Lisbon Strategy (2000-2010) to assess the quality of life and functional health status of Europeans. The HLY is also part of the European Community Health Indicators (ECHI) and was set as the overarching target of the partnership of Innovation Union (research and development component of the strategy Europe 2020) on Active and Healthy Ageing, the target being an increase in HLY in the European Union of two years by 2020. HLYs are obtained by applying the prevalence of disability observed in the general population to a standard life table to distribute the years lived into those lived with disability and those lived free of disability. The same principles are applied to compute the life expectancy without chronic disease and the life expectancy in good perceived health. The health information used (prevalence of activity limitation, longstanding health problems, self perceived health) comes from the annual EU-SILC survey whose implementation is coordinated by EUROSTAT. Self perceived health is measured by the question: How is your health in general? Very good, good, fair, bad, very bad. Chronic diseases are measured by the question: Do you have long standing health problems? Yes, no. The prevalence of disability is measured by a general question on activity limitations: To what extent have you been limited for at least 6 months, due to health problem, in activities people usually do? Severely limited, limited but not severely, not limited at all. EUROSTAT calculates and disseminates the HLY as it does for all European policy indicators. The objective is to provide in year t (i.e., 2013) the HLY indicators of year t-2 (i.e., 2011). The Joint Action EHLEIS, supported and supervised by the European Commission, disseminates widely the results for all ages (not just birth and age 65 years) through country reports, dedicated websites, Wikipedia, and other media, encourages correct interpretation through training material and an interpretation guide, promotes their use in policies and, lastly and most importantly, produces in-depth analyses of trends and gaps in HLYs and their determinants.