Infantile anorexia with vomiting is a symptom observed in certain remote regions on Réunion, surrounded by ravines. It is from this geographical feature that the related neurological disease gets its name. The team led by Alexandra Henrion Caude, research associate at Inserm’s “Genetics and epigenetics of metabolic, neurosensory and development disorders” unit (Inserm/Université Paris Descartes) studied the genetic causes of what the team has called “Ravine” syndrome. This research has established, for the first time, a link between a human hereditary disease and a one-off mutation of a non-coding “jumping” gene. This type of gene is made up of elements repeated in the genome which were long thought to be useless. The results, published in the journal PNAS, show that a single gene change is responsible for this fatal disease, and that the same type of gene could play a significant role in the development of the brain.

In the south of Réunion, a French island in the Indian Ocean, wide ravines cutting into the mountains have, in the past, isolated some of the island’s population. As a result of its particular geographical location and socio-economic situation, this region has historically been marked by a high degree of inbreeding. As a result, genetic anomalies have been passed down from one generation to another. Alexandra Henrion Caudes and her team looked into the genetic causes of a serious disease, which has been named Ravine syndrome or Ravine encephalopathy owing to the fact that it is observed mainly in populations living in the vicinity of ravines. It occurs in some children on the island before they reach their first birthday. They show symptoms of infantile anorexia with uncontrollable vomiting, as well as a gradual disappearance of the brain’s white matter, which is what makes the disease fatal. “Ever since Darwin, islands have been renowned especially for their fauna and flora. Their isolation, however, also makes them an ideal site for studying genetic diseases,” points out Alexandra Henrion Caude, Inserm research associate and coordinator of this study. 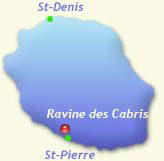 According to the classical definition, genes only represent a minute part of the human genome, half of which is composed of repetitive DNA sequences, including what are known as “jumping” genes. The impact of variations in these genes has been largely unexplored until now. In this study, Alexandra Henrion Caude, François Cartault, a geneticist at La Réunion university hospital and their teams analysed the genetic profile of nine families, some of which had several affected children. In one jumping gene, they identified a one-off mutation that was common to the children with Ravine syndrome. If the child inherits this mutation from both parents, he or she contracts the disease. Based on this single variation, the researchers revealed the existence of a long, mutant non-coding RNA molecule that causes this neurological disease. 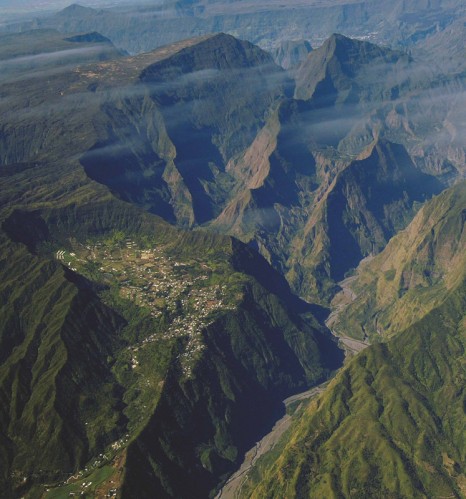 Ravine on the island of Réunion, where geographic isolation may have contributed to a founder effect

They simulated the production of the non-coding RNA observed in the diseased brain and observed the induction of neuronal death. The observed mutation is located in a hairpin RNA structure. Drawing on this RNA structure, the research team has put forward various hypotheses regarding the involvement of this jumping gene in maintaining neuronal balance: RNA editing, small RNA (micro RNA) maturation and/or functioning via specific proteins (PIWI, SRP).

“This is the first time that a human hereditary disease has been associated with a one-off mutation in this type of jumping gene, transcribed as a long non-coding RNA,”

Her recent work points to intracellular dynamics in this type of non-coding RNA, based on the location of certain small RNA molecules in the mitochondria, and the important role played by these RNA molecules in human development.

“The history of how Réunion was populated partly explains how Ravine syndrome developed on the island. Our study explores the genetic origins of this disease and we suggest that jumping genes modify complex functioning networks of the human brain,” adds the researcher.