The Yin and Yang of Low-dose Irradiation on Hematopoiesis

A team of researchers from CEA, Inserm, and the Paris-Sud and Paris Diderot universities has shown that exposure to low doses of irradiation (0.02 Gy) leads of a loss of hematopoietic stem cell[1] (HSC) function. The team has also shown that irradiation at this low dose facilitates efficient bone marrow transplantation without myeloablation[2]. These results, published in Cell Reports on September 26, 2017, show both the positive and negative aspects of low doses of irradiation.

What are the consequences of exposure to low doses of ionizing radiation, for example during medical examinations using X-rays? Previous epidemiological studies associated exposure to low doses of irradiation (<0.1 Gy) with an increased frequency of hematologic disease onset. However, no biological link between exposure to low doses of irradiation and hematopoietic cell abnormalities had been shown. The results obtained by the researchers from CEA, Inserm, and the Paris-Sud and Paris Diderot universities show that low-dose irradiation of HSCs, cells at the origin of all blood cells, leads to a decrease in HSC number and function. These effects on the stem cells can also be observed in vivo in inflammation and may lead to a deficiency in blood cell production and the risk of aplastic anemia[3] or leukemic transformation.

These results point to the need for careful management when performing medical imaging, particularly in patients presenting signs of inflammation. It could also provide major therapeutic benefit to patients who are candidates for autologous bone marrow transplantation, particularly when a gene therapy protocol is used. 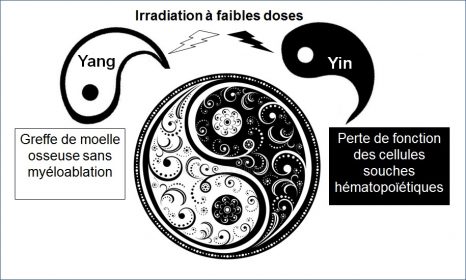 [2] Drug treatment to destroy the patient’s own bone marrow prior to transplant.

[3] Insufficiency of the bone marrow to produce the various blood cell lines caused by more or less lasting HSC rarefaction.

[4] In gene therapy, autologous transplant consists of taking a patient’s HSCs and reconstituting his hematopoiesis with his own, genetically modified stem cells.

TO CITE THIS POST :
Press release – Inserm press room The Yin and Yang of Low-dose Irradiation on Hematopoiesis Link : https://presse.inserm.fr/en/the-yin-yang-of-low-dose-irradiation-on-hematopoiesis/29562/