Towards the development of bisphenol A substitutes

Bisphenol A (BPA), which is present to a great extent in our domestic environments, is suspected of inducing hormonal effects in humans. Researchers from Inserm and CNRS in Montpellier have studied the interaction of BPA and its derivatives with the oestrogen receptor, one of its main targets, at molecular level. In this study published in PNAS, the researchers describe for the first time how this compound acts at molecular level and present a bioinformatic tool that can predict in 3D its interaction with the receptor and can evaluate whether potential substitutes bind to this receptor. These results will ultimately guide the synthesis of new compounds that keep their industrial characteristics but do not have hormonal properties.

Bisphenol A (BPA) is a chemical compound used in the composition of plastics and resins. For example, it is used in the manufacture of food containers such as plastic bottles and babies’ feeding bottles. It can also be found in the protective film inside beverage cans and in till receipts where it is used as a developing agent. Recent studies have shown that this industrial compound has adverse effects on the reproduction, development and metabolism of laboratory animals. BPA is currently strongly suspected of having the same effects on humans. The manufacture and sale of babies’ bottles produced using bisphenol A has been banned in Europe since January 2011. The studies are continuing and some have already revealed significant levels of BPA in blood, urine and the human placenta.

Although considered to be an endocrine disruptor that can upset certain cellular receptors by mimicking the action of natural hormones, the molecular action that causes these adverse effects remained obscure. By combining complementary approaches from cellular and structural biology, two teams from Montpellier  (Inserm/UM1/CRLC Unit 896 ‘Montpellier Cancer Research Institute’ and Inserm/CNRS/UM1 Unit 1054 ‘Centre for Structural Biochemistry’) have shown how BPA and its derivatives interact with the oestrogen receptor and modulate its activity.

The researchers first showed using biological tests that the regions of the receptor activated by the binding of bisphenols A, AF and C differ from those activated by estradiol, the hormone that naturally binds with it.

“These results suggest that bisphenols might not reproduce all the effects of estradiol in the various target tissues and underline the importance of choosing the right tests when assessing whether bisphenols are ‘endocrine disruptors’,”

explain Patrick Balaguer and William Bourguet, the two Inserm researchers who are the main authors of the study.

To find out how bisphenols bind to the oestrogen receptor, they then characterised the interaction at atomic level using X-ray crystallography. This technique, which uses state-of-the-art instruments like the ESRF Synchrotron in Grenoble, consists of obtaining a crystal made of proteins (in this case measuring 1/10 mm) from the compounds to be analysed and lighting it up with an X-ray beam to find out its atomic structure.

Unlike the theoretical models designed on the basis of the structure of the receptor when estradiol is present, the results of the X-ray crystallography analysis give a very precise picture in 3D of the actual structures present when bisphenol binds to the receptor. From these results, the researchers developed a bioinformatic tool that can predict the interaction between bisphenols and their various target receptors (oestrogen receptors, androgen receptors and the oestrogen-related receptor gamma). 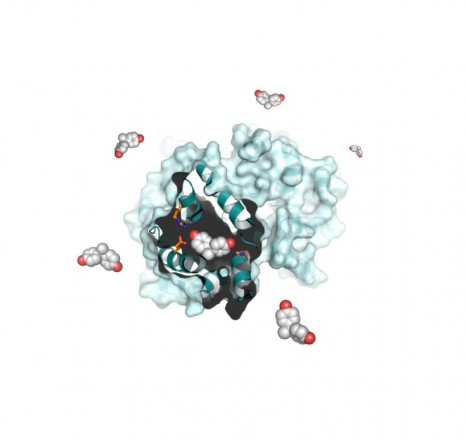 Figure 1: This crystallography structure shows how BPA (grey carbon atoms and red oxygen atoms) binds to the oestrogen receptor (light blue molecule surface). Certain amino acids that are important for the interaction are shown in orange.

“The results of our study and the cellular, biophysical and bioinformatic tools we have developed will make it possible to guide the synthesis of new compounds so they keep their industrial characteristics but do not have hormonal properties,” explain Patrick Balaguer and William Bourguet, research directors at Inserm.

“We are currently continuing our work to identify the crystallographic structures formed with other endocrine disruptors such as alkylphenols, pesticides, parabens and benzophenones, and to extend our IT programme to these environmental pollutants. The availability of these results should also make it easier to evaluate all the molecules referred to by the REACH Regulation (140,000 compounds) to find out whether they are ‘endocrine disruptors’,” conclude the researchers.

TO CITE THIS POST :
Video press release – Inserm press room Towards the development of bisphenol A substitutes Link : https://presse.inserm.fr/en/towards-the-development-of-bisphenol-a-substitutes/3990/