A sonar vision system for the congenitally blind

A “sonar vision” system enabling the congenitally blind to perceive the shape of a face, a house, and even letters and words is being developed by a team at Jerusalem’s Hebrew University. Using this device, the researchers have shown that the areas of the cerebral cortex normally devoted for reading become activated under the influence of stimuli in individuals blind from birth.

The results of this study, conducted in collaboration with researchers at the Institute of the Brain and Spinal Cord (Inserm/UPMC/AP-HP) and NeuroSpin (CEA-Inserm) Research Centre, were published on 8th November in the journal Neuron.

It is generally accepted that the visual cortex fails to develop normally in the congenitally blind, to such an extent that it can prove impossible to recover sight at a later point – even in cases where blindness can be corrected. In reality, the blind can indeed access a kind of vision, describe objects, and even identify letters and written words when using a “sensory substitution” device (SSD), which transforms images into sound.

These are the results of the study conducted at theEdmondand Lily Safra Neuroscience Centre (HebrewUniversity,Jerusalem). The study was designed by researchers at theHebrewUniversity, who conducted the experimental part, with the scientific support of French cognitive neuroimaging specialists.

In practical terms, the device includes a small video camera embedded in a pair of spectacles, a laptop (or smartphone) transforming images into sounds, and stereo headphones with which to hear these sounds. For example, an oblique line will be transformed into a higher-pitched (or increasingly lower-pitched) sound. The same principle enables the encoding of much more complex images in auditory form. 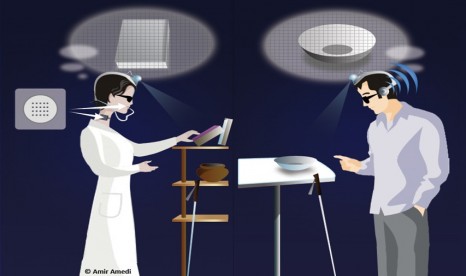 With this system, the blind can achieve greater “visual” acuity than the state defined as blindness, according to WHO criteria.

After only 70 hours of specialised training, the blind are able to correctly classify images into different categories (faces, houses, etc.). They can also perceive other important information such as the location of people in the room or certain facial expressions. They can even manage to read letters and words (see videos on http://brain.huji.ac.il/).

Beyond the performance enabled by this sensory substitution system, theHebrewUniversityresearchers are seeking to understand what happens in the brain when the blind learn to “see” through sound. To this end they have developed a functional MRI study with a specific paradigm.

In particular, they have shown that the regions of cortex normally devoted to visual perception, whose usefulness is uncertain in blind subjects, are strongly activated during the “sonar vision” of faces, houses and words, etc.

The visual cortex not only becomes activated, it also demonstrates a “normal” functional specialisation for different categories of objects. Thus, in sighted subjects, a specific region of the visual cortex of the left hemisphere (known by the acronym VWFA) is known to become more strongly activated during the perception of strings of letters than during the perception of other types of objects. Exactly the same region is activated when blind subjects read letters using the “sonar vision” device.

The fact that this specialisation for reading develops after just a few hours of training shows a remarkable degree of cerebral plasticity,” explains Stanislas Dehaene (NeuroSpin Imaging Centre). These results support the idea that in fact the so-called visual cortex in analysing objects by their shape and can perform this same function based on a visual input (as is usually the case), but also if necessary, on a auditory or tactile input.

“These results suggest that it may be possible, using appropriate technology and rehabilitation, to ‘awaken’ certain regions of the brain and access certain aspects of the visual world, even after years or even a lifetime of blindness,” concludes Laurent Cohen (ICM Research Centre).