A new therapeutic strategy to combat prion and Alzheimer’s diseases

A work performed by the teams headed by Benoit Schneider and Odile Kellermann (INSERM Unit 747, team “Stem cells, Signalling and Prions”, Université Paris Descartes) as well as Jean-Marie Launay’s team (INSERM Unit 942 Hôpital Lariboisière and the FondaMental Foundation) was published this week in the magazine Nature Medicine. The article revealed that in neurons, an enzyme, the kinase PDK1, is involved in the accumulation of the pathological proteins involved in prion and Alzheimer’s diseases. The researchers show that the pharmacological inhibition of this enzyme exerts a beneficial effect towards both pathologies.

Details of this research were published in the magazine Nature Medicine 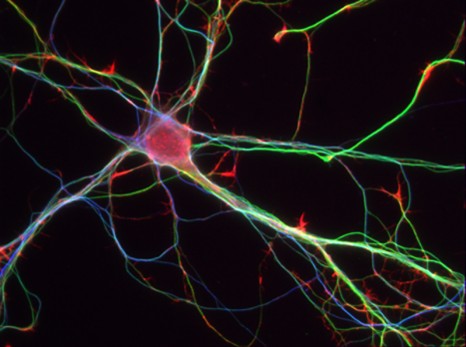 Prion diseases (Creutzfeld-Jakob disease in humans) and Alzheimer’s disease are associated with an accumulation of abnormal proteins in the brain. These are the scrapie prion protein (PrPSc) in the case of prion diseases and Aß amyloid peptides in the case of Alzheimer’s. In the brain, PrPSc and Aß peptides exert their toxic effect by causing the death of neurons, at the root of the clinical symptoms associated with these diseases.

It is acknowledged that the production of the pathological proteins PrPSc and Aß40/42 originate from a defect in the physiological cleavage of the entire, non-pathological prion protein (PrPC) or of the amyloid peptides precursor (APP). However, it remained unsolved why this cleavage, which normally protects neurons, is altered in prion and Alzheimer’s diseases.

The work performed by Benoit Schneider (CNRS researcher in INSERM Unit 747, “Stem cells, Signalling and Prions”, Université Paris Descartes) and Jean-Marie Launay (INSERM Unit 942 Hôpital Lariboisière) in collaboration with other French teams working in the prion field has just identified a cascade of reactions that blocks the beneficial cleavage of PrPC and APP by the alpha-secretase TACE (an acronym for the TNFα Converting Enzyme). The researchers demonstrate how TACE dysregulation contributes to neurodegeneration by causing the accumulation of the PrPSc and Aß40/42 pathological proteins and exacerbating neuron sensitivity to inflammation.

Under normal physiological conditions, TACE is present on the surface of neurons, where it cleaves PrPC, APP and the receptors to TNFα inflammatory factor (TNFR), thus restricting the production of the pathological proteins PrPSc and Aß and protecting neurons from the toxic effects of TNFα.

In neurons infected by pathogenic prions as in the “Alzheimer’s” neurons, the TACE protease is no longer present on the cell surface but is found inside neurons. This internalization diverts TACE away from its substrates, that is PrPC, APP and TNFR, and thereby cancels its neuroprotective activity. The researchers reveal for the first time that the kinase PDK1 plays a key role in controlling the localization of TACE in neurons. The overactivation of PDK1 is responsible for the internalization of TACE in diseased neurons (those infected by prions and Alzheimer’s neurons) as in the brains of patients suffering from Alzheimer’s disease.

The pharmacological blockade of PDK1 relocates TACE to the surface of neurons and restores its neuroprotective function. The inhibition of PDK1 protects neurons from neurodegeneration by rescuing the physiological cleavage of PrPC, APP and TNFR by TACE.

“Based on our work on prion infection, we succeded in identifying PDK1 as a new therapeutic target not only for Creutzfeld-Jakob disease but also for Alzheimer’s disease” explained the researchers.

The action of PDK1 on TACE was demonstrated in vitro using a neuronal cell line and cultures of neurons isolated from the brains of mice that had been infected by pathogenic prions, and in vivo using animal models. Treatment with PDK1 pharmacological inhibitor attenuates the motor deficits and extends the life span of mice infected with prions. Using three mouse models of Alzheimer’s pathology, the researchers showed that the treatment also counteracted memory and cognitive deficits associated with Alzheimer pathogenesis.“Because treatments available to combat prion and Alzheimer’s diseases are few and their efficacy limited, these results could open up new avenues for the treatment of these neurodegenerative diseases”, conclude the researchers.

By demonstrating that the inhibition of PDK1 alleviates both prion and Alzheimer’s diseases, these data argue that at a mechanistic level AD links to prion diseases. Dysregulation of PDK1-dependent TACE cleavage activity emerges as a central event in neurodegenerative pathways involved in both diseases.

The challenge is now to understand how pathogenic prions or amyloid Ab peptides trigger PDK1 activation.

A Gene Therapy Tested in the Treatment of Myotubular Myopathy

Inserm and CNRS researchers from the Institute of Genetics and Molecular and Cellular Biology (Inserm/CNRS/Université de Strasbourg) have discovered how myotubularin - a protein deficient in myotubular myopathy - interacts with amphiphysin 2 and suggest targeting the latter in order to treat ...