The decline of the neurogenesis mechanism (production of new neurons) during ageing is implicated in the emergence of neurodegenerative diseases such as Alzheimer’s disease. Research studies bringing together Inserm, CNRS and Université de Pierre et Marie Curie researchers from the Brain and Spinal Cord Institute (Inserm/ CNRS / Pierre and Marie Curie University), in collaboration with a team from the Yale Cardiovascular Research Center, have demonstrated the importance of factor VEGF-C in the activation of neural stem cells, and hence in the production of new neurons. These results, published in Cell Reports, bring fresh hope for the development of therapies that may help to improve the production of neurons to alleviate cognitive decline in people with Alzheimer’s disease.

Throughout life, adults are able to generate new neurons from neural stem cells (NSC), in order to maintain their complement of cognitive skills. This neurogenesis occurs in the hippocampus, a brain structure that plays a central role in memory. However, age and some strokes lead to a decline in this function, and can contribute to the appearance of serious cognitive disorders, such as Alzheimer’s disease.

Although the stages in the formation of new neurons are well known, the molecular mechanisms of this phenomenon are less well understood. Indeed, NSC spend most of the time in a quiescent state during which the cells are outside the cell cycle and do not divide. The repressors that maintain this quiescent phase have been identified, but there are still many questions about the factors that make it possible to exit this cell “dormancy.”

Against this background, Jean-Léon Thomas and Anne Eichmann decided to focus on the vascular endothelium growth factors (VEGF) and their receptors (VEGFR), which are already suspected of involvement in regulating the growth and maintenance of nerve cells. More specifically, they chose to study the potential activating ability of factor VEGF-C when bound to its receptor, VEGFR3.

Their in vitro and in vivo experiments confirm that rodent NSC possess receptor VEGFR3 and also produce factor VEGF-C. Stimulation of NSC by VEGF-C leads to the activation of these cells, i.e. their entry into the cell cycle and conversion into neural progenitor cells, and ultimately, the production of new neurons. The specific feature of VEGF-C action in the brain, compared with other vascular growth factors such as VEGF-A, is that it induces the NSC to respond at concentrations that do not induce vascular proliferation. This property confers potential interest on VEGF-C as a specific activator of NSC in the brain. 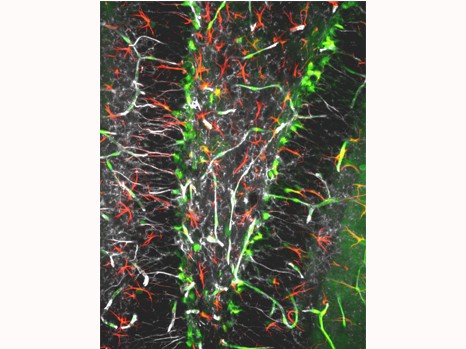 ©Inserm, Jinah Han. Among the hippocampal neural stem cells (characterised by expression of Nestin [in white] and GFAP [in red]), those that possess receptor VEGFR3 (in green) are very numerous.

In mice that produce VEGFR3-deficient NSC, this neurogenesis phenomenon is abolished. The scientists thus show that VEGF-C/VEGFR3 signalling is not just involved, but is absolutely required for the neural stem cells to “awaken,” and is hence required for the creation of new neurons.

This mutant model also enabled the team to observe a correlation between mood disorders and deterioration of the neurogenesis function of the hippocampus. As suspected, these mice, in which NSC activation is compromised, develop exaggerated anxiety on ageing, similar to that seen in patients with Alzheimer’s disease. This result suggests that VEGF-C/VEGFR3 neural signalling participates in the maintenance of cognitive functions in the murine model.

As a logical continuation of this work in rodents, the researchers wondered about the presence of similar mechanisms in humans. They then discovered that this signalling pathway is conserved in human nerve cells, where it also promotes cell proliferation and survival in vitro.

Although these results are still preliminary, they provide arguments to support the idea that adult NSC activity could have a central role in physiological and behavioural control in the body. Similarly, the decline in this activity during ageing could be associated with the onset of mood disorders such as anxiety and depression.

From the therapeutic point of view, these studies are encouraging: VEGF-C might be a good candidate for improving the production of new neurons and offsetting cognitive decline in people with Alzheimer’s disease.

For the first time, a team led by Inserm researchers Jean-Luc Martinot and Éric Artiges at the Developmental Trajectories and Psychiatry laboratory (Inserm/ENS Paris-Saclay) and the Borelli Center (CNRS/Université Paris-Saclay) looked for factors that would predict the onset of anxiety disorders ...