Toward the synthesis of antibiotics by a new bacterial enzyme 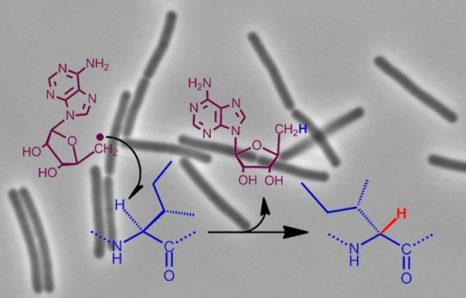 Researchers at the French National Institute for Agricultural Research (Inra) and Inserm have discovered a new family of bacterial enzymes that can produce hitherto unidentified peptides with antibiotic activity. Published in Nature Chemistry, this work holds promise for the synthesis of molecules of pharmaceutical interest and the design of new antibiotics.

As part of research involving study of the enzymes of the gut microbiota, researchers from Inra and Inserm studied the model bacterium Bacillus subtilis. Genetic analysis of the organism showed the presence of genes conserved by common bacteria from the gut microbiota, such as enterococci. *

The scientists were especially interested in two Bacillus subtilis genes potentially coding for a peptide and an enzyme from the superfamily known as “radical SAM enzymes.” Their work has made it possible to describe a new enzyme mechanism that can transform a peptide into a bioactive molecule. Known as epimerisation, this enzymic transformation brings about a change in the configuration of certain amino acid residues from the L- configuration (normally found in peptides) to the D-configuration. The researchers discovered how this enzyme works: it removes a hydrogen atom from the alpha-carbon atom of the amino acid residues and donates another, bringing about their epimerisation. It is a mechanism not previously described in nature.

It is the first time that researchers have demonstrated the ability of “radical SAM” enzymes to catalyse epimerisation within a peptide in vitro. Surprisingly, the peptide thus modified and called an “epipeptide” is able to inhibit growth of Bacillus subtilis very effectively. These epipeptides thus represent a new class of natural products that might be used to develop new antibiotics against Gram positive bacteria (such as staphylococci, enterococci or streptococci), which are becoming increasingly antibiotic resistant, constituting a major public health problem.

TO CITE THIS POST :
Press release – Inserm press room Toward the synthesis of antibiotics by a new bacterial enzyme Link : https://presse.inserm.fr/en/toward-the-synthesis-of-antibiotics-by-a-new-bacterial-enzyme/27607/