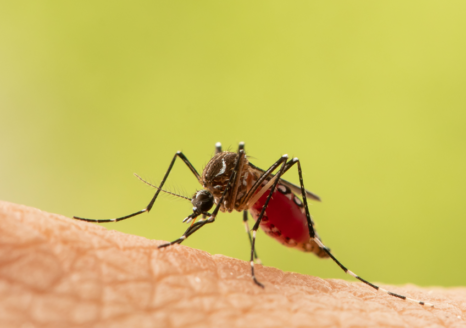 Aedes mosquitoes are the principal vectors of dengue and other arboviruses, including Zika, for which no vaccines or antiviral treatments currently exist. Understanding the factors that influence the transmission of arboviruses from mosquitoes to humans is therefore a priority because it could guide the implementation of public health measures that could limit or even prevent epidemics. In a new study, a team of researchers from Inserm, CNRS and Université de Strasbourg at the Institute of Molecular and Cellular Biology, in collaboration with the Federal University of Minas Gerais in Brazil, described the virome (the totality of the viruses) present in 800 mosquitoes collected in six countries across four continents. The scientists show that out of the 12 viruses identified, two of them do not infect humans but increase the potential for transmission of dengue and Zika. The mechanism involved reveals the existence of a new cellular factor hijacked by arboviruses in mosquitoes. Their findings have been published in Nature Microbiology.

Among the infectious viral diseases transmitted by mosquitoes, the frequency of dengue is the fastest growing worldwide, and is currently responsible for 400 million new infections each year. This increase in the number of cases of dengue, as well as other diseases caused by viruses transmitted by mosquitoes (arthropod-borne viruses), such as Chikungunya and Zika, reflects the geographic expansion of the principal vector mosquitoes, Aedes aegypti and A. albopictus, particularly due to globalization and climate change.

The virological surveillance of adult Aedes mosquitoes using metagenomic analysis[1] can lead to the early identification of circulating arboviruses and thus contribute to improving public health measures. In addition to arboviruses, these surveillance methods have identified a large number of insect-specific viruses in Aedes mosquitoes. Although they do not infect mammals, these viruses are likely to impact the dynamics of arbovirus transmission to humans.

This is the context for the research by a team of scientists from Inserm, CNRS and Université de Strasbourg, in which they characterized the full virome of Aedes mosquitoes on a global scale.

Using a high-throughput RNA sequencing technique[2] coupled with bioinformatics analysis according to a method developed in their laboratory, the researchers made an inventory of the viruses present in Aedes mosquitoes worldwide. They worked with a network of collaborators, the majority of whom are participating in the European consortium ZIKAlliance[3], to collect over 800 mosquitoes at 12 different sites in six countries across four continents. This enabled them to identify 12 circulating viruses, present in these mosquitoes, five of which had previously never been described.

Two of these 12 viruses, Phasi Charoen-like virus (PCLV) and Humaita Tubiacanga virus (HTV)[4], attracted the researchers’ attention because of their high levels of prevalence (they were present in over half of the samples). These two viruses were either not present or present only to a small extent in the samples from Africa, where there are few cases of dengue, in comparison with Asia or South America, where there are many.

To find out whether PCLV and HTV could affect the transmission of dengue, the scientists looked at Caratinga, a small city in south-east Brazil, where dengue is endemic and for which they have an archived collection of the RNA of over 500 mosquitoes collected there over a one-year period. This analysis of samples collected in the field revealed an interaction between HTV and PCLV with the dengue virus, with those mosquitoes infected with HTV and PCLV being three times more likely to also be infected with dengue.

The scientists then confirmed this observation in the controlled environment of Strasbourg’s insectarium, showing that the introduction of HTV and PCLV into laboratory mosquitoes increased replication of the dengue (DENV) and Zika (ZIKV) viruses. Higher levels of these viruses shorten the extrinsic incubation period, which is the time required for infected mosquitoes to become infectious. By using mathematical modelling, the researchers suggest that this greater infectious capacity could multiply the risk of dengue and Zika transmission by five when HTV and PCLV are present.

These findings all raise the question of the mechanism by which HTV and PCLV affect DENV and ZIKV replication. The researchers tried to find some explanations.

By studying gene expression in dengue-infected mosquitoes, in both the absence and presence of HTV and PCLV, the scientists discovered the major role of histones (proteins that combine with DNA to compact it and form chromatin), and particularly histone H4. Their findings show that the dengue virus uses histone H4 to multiply in mosquitoes. HTV and PCLV, through a mechanism that has yet to be determined, maintain the expression of histone H4 in infected mosquitoes, thereby promoting this multiplication of the dengue virus.

“A better understanding of the molecular mechanisms that govern the interaction between these three viruses seems essential for the continuation of our research. Understanding what promotes the transmission of the Zika and dengue viruses could make it possible to propose more effective strategies to reduce the transmission of the virus to humans, and to limit or even prevent epidemics,” concludes João Marques, newly recruited Inserm research director and last author of the study.

[1] Method of studying the genetic content of samples from complex environments taken from nature, here from mosquito samples.

[3] ZIKAlliance is a multinational and multidisciplinary research consortium of 54 partners worldwide, coordinated by Inserm. ZIKAlliance is funded by the European Union’s Horizon 2020 research and innovation program.

[4] Virus discovered by the same team during previous research.

TO CITE THIS POST :
Press release – Inserm press room Dengue and Zika Viruses: Towards a Better Understanding of the Mechanisms of Transmission Link : https://presse.inserm.fr/en/dengue-and-zika-viruses-towards-a-better-understanding-of-the-mechanisms-of-transmission/46355/

Mosquito vector competence for dengue is modulated by insect-specific viruses