A humanoid robot to liaise between space station crews

A team of French researchers from the Institut cellule souche et cerveau (Inserm/Université Claude Bernard Lyon 1), led by CNRS senior researcher Peter Ford Dominey, has developed “an autobiographical memory”[1] for the robot Nao, which enables it to pass on knowledge learnt from humans to other, less knowledgable humans. This technological progress could notably be used for operations on the International Space Station, where the robot, which is the only permanent member, would liaise between the different crews that change every six months in order to pass on information. These results will be presented at the 24th International Symposium on Robot and Human Interactive Communication, on September 3, 2015 in Kobe, Japan.

Human culture stems from knowledge acquired through society’s shared experience. Cultural transmission enables new members of society to quickly learn from this accumulated experience. In order for a robot to understand cooperative behavior, which is necessary for the cultural transmission of knowledge, researchers developed a system whereby a human agent can teach the Nao humanoid new actions through physical demonstration (by putting the robot’s members in the correct position), visual imitation (through the Kinect system), or voice command. These individual actions are then combined into procedures and stored in the robot’s autobiographical memory developed by researchers, thus enabling the robot to reproduce them for other human agents if needed.

Researchers set up this autobiographical memory system to meet the challenge of cooperation between humans and robots, which is becoming more and more of a reality in the field of space operations, with the humanoid Robonaut 2[2] now permanently flying aboard the International Space Station.

To test their system, the scientists imagined a scenario that could occur on the International Space Station. The transmission of information on board is essential, since crews change every six months. In this scenario, an electronic card is damaged. Nao plays the role of the scientist’s assistant by following his directions, bringing or holding parts of the card during repair. If this same failure happens again, the memory of this event will enable the robot to use a video system to show the repair that was made to a new member of the crew. It could also respond to questions regarding the previous event, while helping with the new repair. If a slightly different failure takes place, the robot could share its expertise on failures of this type, while recording the steps needed to resolve this new problem and then transferring them to the scientists in the next crew.

These results demonstrate the feasibility of this system, and show that such humanoid robots represent a potential solution for the accumulation and transfer of knowledge.

Researchers are now hoping to test their Nao robot in the real conditions of space operations, with zero gravity. They would also like to develop another area of application, assisting the elderly, with the robot this time playing the role of a personal memory aid. 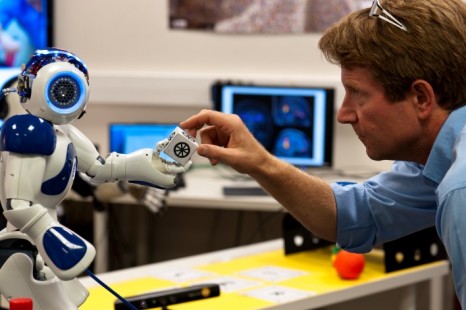 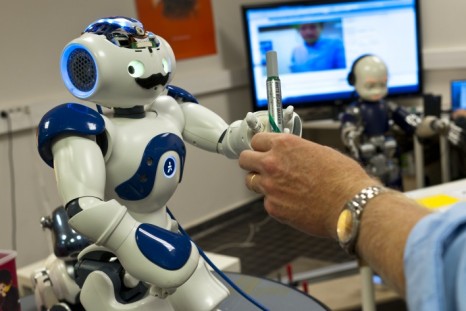 Peter Ford Dominey and the robot Nao, study of developmental robotic cognition. Instead of using pre-established plans, the robot can learn in real time through direct interaction with a human. ©Inserm/Patrice Latron

See the robot Nao learning to repair an electronic card:

[1] Autobiographical memory includes events that were personally experienced, along with their context. It makes it possible to date and locate memories, and to determine who was present during the event. With human beings, autobiographical memory helps build an individual’s personal history.

[2] Robonaut 2 is a humanoid robot resulting from the Robonaut program, a close collaboration between NASA and DARPA. A unit was delivered to the ISS in February 2011 to control the robot’s operation in weightlessness. It was designed to assist the work of astronauts in complicated situations, especially during extra-vehicular outings.