University of Nantes, Inserm and Thinkovery have joined forces to produce a new kind of MOOC (Massive Open Online Course). Alternating as it does between theory and practice, “Ouvrez les portes du laboratoire: cellules et cellules souches,” (Open the laboratory doors: cells and stem cells) invites members of the public to discover, by means of enriched video content, the actual work done by researchers at Université de Nantes, Inserm and CNRS.

From 16 March 2015, all Internet users will thus be able to understand how and why researchers grow stem cells in the laboratory, and will be able to attend a course on cell biology. 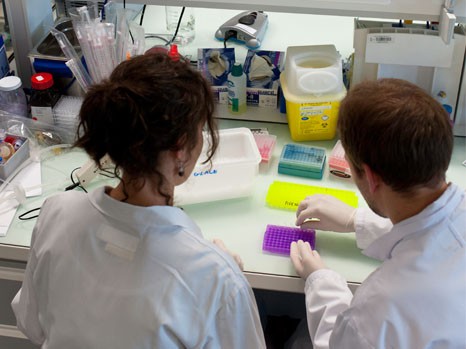 After more than a year of design and production, the MOOC “Ouvrez les portes du laboratoire: cellules et cellules souches” will begin on 16 March 2015, and will be accessible on the FUN (France Université Numérique/France Digital University) platform. Registration is already open.

To put this novel MOOC together, teams from Université de Nantes, in partnership with Inserm, have joined forces with a new medium devoted to research, Thinkovery.

They have combined their knowledge and ability to produce this six-week online course, and over fifty two- to five-minute videos, mainly with financial support from the Pays de la Loire Region and L’Oréal Research and Innovation. L’Oréal also contributed to preparing the content of this MOOC that covers aspects of somatic hair follicle stem cells.

“We regularly open up our research laboratory to the public, but for one thing it is difficult for us to accommodate everyone, and for another thing, such days do not give the public the opportunity to follow a project from start to finish.

It was this observation that gave us the idea. Based on the same principle as the MOOCs that throw open the doors of lecture theatres, we wanted to throw open the doors of our laboratory via the Internet,” says Patricia Lemarchand, a physician, lecturer and researcher at the Institut du Thorax at Nantes, of the initiative for the project with Loïc Le Gac of the Thinkovery company.

The MOOC alternates between two series:

The “Côté Cours” (Lecture Side) introductory videos on cell biology describe the main concepts needed to understand the “Côté Laboratoire” (Laboratory Side) videos, which immerse the visitor in the daily work of a joint research team.

To register for the MOOC

Registration is open! Go to the FUN platform to register for free for the