A new strategy for emergency anticoagulant treatment for patients with acute myocardial infarction has been put in place by a team led by Philippe-Gabriel Steg at Inserm Unit 698 (Haemostasis, Bioengineering, Immunopathology and Cardiovascular Remodelling), at Hôpital Bichat, AP-HP, Université Paris Diderot). These results from the EUROMAX clinical trial are published in The New England Journal of Medicine.


Myocardial infarction, commonly called “heart attack,” remains the leading cause of death worldwide, and affects nearly 100,000 individuals a year in France. The reference treatment is urgent dilation of the arteries to enable the blood to circulate to the heart (This medical procedure is known as primary angioplasty). Angioplasty requires injectable anticoagulant treatment for which several options are available. 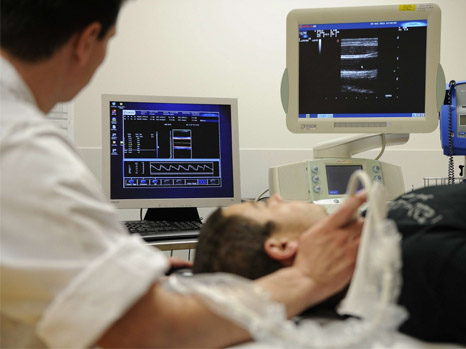 An international team led by Philippe-Gabriel Steg at Inserm Unit 698 (Haemostasis, Bioengineering, Immunopathology and Cardiovascular Remodelling), at Hôpital Bichat, AP-HP, Université Paris Diderot) has just reported the results of a large international clinical trial carried out in 9 European countries, on nearly 2,200 patients, testing the administration of anticoagulant treatment prior to arrival in hospital by emergency teams and the emergency ambulance service, and comparing the two strategies, in The New England Journal of Medicine . The first is based on heparin (traditional treatment), the other on a more specific anticoagulant, bivalirudin. One of the main drawbacks of these anticoagulant treatments is the risk of associated haemorrhage. “By dilating the arteries, we also thin the blood, with the risk of uncontrolled bleeding if haemorrhage occurs,” explains Philippe-Gabriel Steg.

After 30 days of monitoring, bivalirudin reduced the risk of death or serious bleeding by 8.5 to 5.1% and the risk of death, myocardial infarction or major bleed by 9.2 to 6.6%, compared with the strategy using heparin.

This benefit was mainly linked to the reduction in serious bleeding, at the cost of an increased risk of stent thrombosis . “The benefits are robust and consistent for all sub-groups tested, and in particular, consistent regardless of the type of oral anti-clotting treatment or route of arterial access used for angioplasty (via the radial or femoral artery),” explains Philippe-Gabriel Steg.
These results open up the way to using bivalirudin as an anticoagulant at the pre-hospital phase of myocardial infarction in patients being urgently transferred. They represent progress in the treatment of myocardial infarction that can be immediately used.
The EUROMAX trial was conducted with the support of The Medicines Company. It is registered in Clinical Trials.gov, under the reference NCT01087723.
TO CITE THIS POST :
Press release – Inserm press room A new treatment for heart attack will soon be available for emergency teams and the emergency ambulance service (SAMU) Link : https://presse.inserm.fr/en/a-new-treatment-for-heart-attack-will-soon-be-available-for-emergency-teams-and-the-emergency-ambulance-service-samu/10023/