For the first time, an animal model can express the two biological characteristics of Alzheimer’s disease. Researchers from CEA, Inserm, Paris-Sud and Paris-Descartes Universities, and CNRS have developed an animal model that reproduces the progression of the human disease. These results offer new possibilities for testing drugs and developing a diagnostic method involving a simple blood test. Their findings were published in Cerebral Cortex on October 18, 2017.

One of the obstacles encountered is the impossibility of diagnosing the disease before it reaches an advanced stage. Yet the biological characteristics of Alzheimer’s appear at least 20 years before the onset of the symptoms (memory loss, etc.). That is why it is necessary to understand this silent phase if we are to hope to treat patients while the brain effects can still be reversed. However, until now, in vitro or animal models making it possible to study this long period preceding the apparition of cognitive symptoms did not exist.

What is more, Alzheimer’s disease, at an advanced stage, is characterized by two types of brain degeneration: the aggregation of Tau proteins in the neurons and the apparition of Aβ42 peptide plaques on the outside of the neurons. Current animal models only express one or the other of these two forms of degeneration.

► Patients are treated too late to be cured and the current animal models are not representative of the human disease.

A collaboration (1) which began in 2013, involving teams from CEA, Inserm, Paris-Sud and Paris-Descartes Universities and CNRS, led to the development of rodent models (2) which present very early stages of the disease as well as the two types of degeneration. Their findings have been published in the journal Cerebral Cortex (REF). For the first time, an animal model presents disease characteristics comparable to those of human patients.

The researchers now intend to use this animal model, called AgenT, in order to:

► Test potential drugs to determine their efficacy and effects on the two types of degeneration;

► Study the early phase of the disease, during which its development could be reversed;

► Search for blood markers of the earliest stage of the disease, making its diagnosis in living patients (ante-mortem diagnosis) possible from 45 or 50 years of age.

A patent was filed for this model by Inserm Transfert in Europe (WO/2015/067668) in November 2013 which was then extended internationally (WO/2015/067668). The granting of this patent is currently being examined in Europe, the United States and Japan.

Jérôme Braudeau (Doctor of Neuroscience, inventor of the model and last author of this paper) and Baptiste Billoir (a graduate of HEC Paris) are currently creating a start-up that will implement this model.

It will conduct preclinical testing for third parties, research laboratories and pharmaceutical industries, as well as its own research to develop the first early diagnostic blood test in humans.

The objective is to be able to screen for Alzheimer’s at least 10 years earlier than we can right now, thereby having a window for the early treatment of the disease before it progresses to an incurable stage. 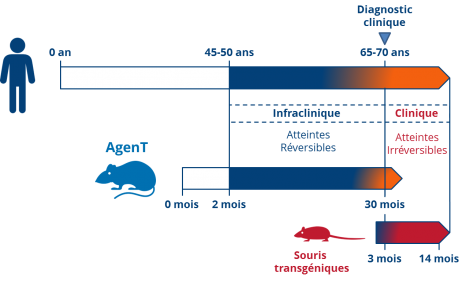 Comparison between the progression of Alzheimer’s disease: 1/ in patients, 2/ in AgenT models (the progression of cognitive disorders and formation of senile plaques is very similar), and 3/ with the transgenic animal models available up to present. © AgenT

TO CITE THIS POST :
Press release – Inserm press room A Novel Animal Model to Speed Up the Fight Against Alzheimer’s Disease Link : https://presse.inserm.fr/en/a-novel-animal-to-speed-up-the-fight-against-alzheimer-disease/29740/